The regiment was created on February 21, 1684 as “Guyenne Infanterie” and given to Charles de La Rochefoucauld, Comte de Blanzac.

In 1741, during the War of the Austrian Succession (1740-48), the regiment initially served in Westphalia. In 1742, it was sent to Bohemia. In 1743, it initially campaigned in Bavaria before being transferred to the Italian theatre of operation. In 1746, it was at Tidone and Piacenza. From 1747 to 1748, it served in Provence.

During the Seven Years' War, the regiment ranked 68th and was commanded by:

The regiment was disbanded in 1762 and its troops incorporated on December 10 of the same year in Dauphin Infanterie.

The first battalion remained in Europe throughout the war and served on the coasts of France until 1760.

By August 1, 1757, the battalion was stationed at Coutances in Lower Normandy.

At the beginning of August 1758, the battalion formed part of the French force defending Cherbourg during the second British expedition against the French Coasts.

On May 3, 1755, the 2nd battalion (13 coys) embarked for Canada on the Illustre and Léopard. It arrived at Québec late in June and was soon dispatched to Fort Frontenac (present-day Kingston) along with the second battalion of Béarn Infanterie. The battalion took up its winter-quarters in the lower part of the Island of Montréal.

In June 1756, the 2nd battalion defended Fort Frontenac on Lake Ontario. It took up its winter-quarters in the town of Québec.

By July 20, 1757, a French force totaling 8,000 men (including the 2nd Battalion) had assembled at Carillon. On August 1, this force left Carillon with Montcalm and advanced upon Fort William Henry. The battalion then took part in the siege of Fort William Henry which lasted from August 5 to 9. After the capture and destruction of the fort, the French force reembarked on August 16. On September 4, the battalion left Carillon and arrived at Saint-Jean on September 7. It was then assigned to the works on the portage road at Chambly. On October 12, a piquet of the battalion was sent to Carillon to garrison the place during winter. On October 29, the rest of the battalion took its winter-quarters on the Chambly River.

In mid June 1758, the 2nd battalion left its quarters and moved towards Carillon. On June 30, the battalion was part of Bourlamaque's detachment who took position at the head of the portage at the outlet of Lake Saint-Sacrement (present-day Lake George). On July 6, it followed the main French force to the left bank of the fall before retreating to Carillon. On July 7, it worked at the entrenchment in front of the fort. On July 8, the battalion took part in the victorious Battle of Carillon where it was deployed on the right wing under Lévis. Between November 1 and 5, the entire French army quit Carillon to move to its winter-quarters, leaving detachments from various battalions to guard the fort. The battalion took up its winter-quarters at Contrecoeur, Laprairie, Fort Chambly and along the Richelieu River.

On May 29 and 30, 1759, the Chevalier de Lévis arrived at Québec with all 5 battalions of regulars (La Sarre Infanterie, Royal Roussillon Infanterie, Languedoc Infanterie, Guyenne Infanterie and Béarn Infanterie) along with the militia of the Government of Montréal. While awaiting the arrival of the British fleet, the French army encamped on the right bank of the Saint-Charles River and fortified it to serve as a second line of defence if ever the British were able to land at Beauport. On June 26, the French army moved to its encampment at Beauport; the 5 battalions of regulars, forming a single brigade, held the centre. On July 31, the battalion took part in the victorious Battle of Beauport where it was sent to reinforce Lévis's Brigade on the left wing. When the British landed and advanced against the redoubts on the strand, the regiment supported Royal Roussillon Infanterie who took position directly behind the entrenchments crowning the heights. Together, they drove back the British assault. In the night of September 4, a British flotilla of flat-bottomed boats passed successfully above Québec with the baggage and stores. At 2:00 p.m., reacting to this manoeuvre, Montcalm transferred Guyenne Infanterie to a new position near the redoubt guarding the bridge on the Saint-Charles River. On September 8, the regiment was sent to Cap-Rouge to reinforce the French force against an eventual British attack. However, on September 9, it returned to its camp near the redoubt on the Saint-Charles River. On September 12, the battalion was ordered to take post on the Plains of Abraham but, for reasons unexplained, it remained encamped by the Saint-Charles. On September 13 at dawn, when its commander was informed that a British army was drawn up on the Plains of Abraham, he marched his battalion who took position on the plains at 6:00 a.m. The same day, the battalion took part in the Battle of Québec (aka battle of the Plains of Abraham) where it was deployed on the left wing. After the battle, the regiment followed the French army in its retreat towards Jacques-Cartier. On September 24, the regiment and Royal Roussillon Infanterie were sent to Deschambault to prevent a landing of the British and to protect the line of communication with Trois-Rivières. On October 25, Lévis sent the battalion along with Royal Roussillon Infanterie as additional reinforcements for Bourlamaque at Île-aux-Noix to stop the advance of Amherst's forces. At the end of November, the French army of Île-aux-Noix retired into its winter-quarters after completing the fortifications of the island. In November, the regiment took up its winter-quarters at Contrecoeur, Laprairie.

By March 1760, 51 men of the battalion had been detached to Saint-Jean while 15 were unfit for duties. This left 325 men available for the expedition against Québec. The latter were supplemented by 277 men from the militias of Sorel, Contrecoeur, Verchères and Varennes who were integrated into the battalion. From April 21 to 25, transport vessels gradually sailed from Montréal for Québec. Overall the battalions then counted 22 officers, 320 regulars, 281 militia and 29 non-combatants for a total of 632 men. On April 28, it took pat in the victorious Battle of Sainte-Foy where it was deployed in the first line of the right wing. On May 23, after the failed attempt against Québec, the battalion along with Royal Roussillon Infanterie departed from the camp on the banks of the Jacques-Cartier River. On August 8, the battalion embarked at Montréal for Isle aux Noix. On September 9, after the capitulation of Montréal, the battalion still counted 300 men and 23 officers. On September 15, as per the terms of the capitulation, the battalion was embarked aboard British transports who reached Québec on October 10 and 11 and then sailed for France where they arrived in December.

After the return of the 2nd battalion to France in 1760, the regiment was reorganised, by the regulation of February 1, 1761, into only 12 companies of 20 fusiliers and one company of 40 grenadiers.

The regiment was disbanded in 1762 and its troops incorporated on December 10 in Dauphin Infanterie.

The Continental and Canadian uniforms seem to be identical. 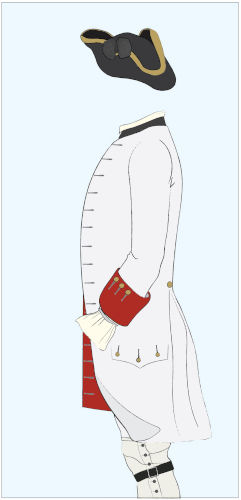