The regiment was created on December 15 1719, during the minority of King Louis XV by the Chevalier Francois-Adam de Karrer de Soleure for service in Louisiana under pay of the Compagnie des Indes. It was raised in Alsace and Switzerland and consisted of 3 companies.

On July 8 1720, the regiment was transferred to the “Service of the Navy” and assigned to garrison La Rochelle and to guard the French establishments of the Mississippi Valley. The regiment was placed under the command of M. de Karrer. In June 1721, all companies, to the exception of the colonel company who remained in Rochefort, embarked for the colonies.

In 1730, the regiments had detachments in various establishements:

In 1733 Karrer was promoted brigadier and resigned as colonel of the regiment.

In 1736, the Chevalier Louis-Ignace de Karrer, son of the previous colonel, assumed command of the regiment, a charge he retained till his death in 1752.

During the War of the Austrian Succession, in 1746 and 1747, part of the regiment was present at the defence of Ré Island and of the Coast of Aunis.

In 1752, the regiment was renamed Hallwyl. It counted a single battalion.

On the eve of the Seven Years' War, the unit counted five companies:

On August 1 1758, another warrant authorised to raise 80 supernumeraries for the colonel company.

The only textual source that we have describing this regiment dates back from 1745. 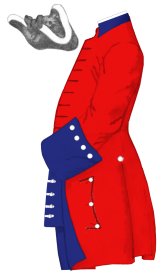 Uniform in 1745 - Source: Richard Couture from a template by rf-figuren

NCOs wore the same uniform as the privates with the following distinctions:

Officers wore the same uniform as the privates with the following distinctions:

No contemporary source describe a colour specific to Hallwyl Infanterie. The regiment probably retained the colours issued under Karrer.

The colonel colour was white with a white cross bearing the motto “Fidelitate & honore terra & mari”, each canton was sewn with golden fleurs de lys