This permanent "Varvade" regiment was formed in 1741 at Helsingfors (actual Helsinki). It consisted of 1,088 men in 2 battalions of 4 companies. Each company had 125 privates and 11 officers, NCOs and musicians.

At the beginning of the Seven Years' War, the regiment garrisoned Helsingfors (actual Helsinki) in Finland. 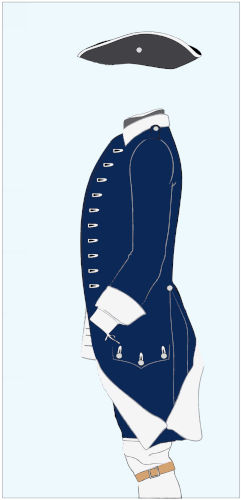 Schirmer as well as Pengel and Hurt mention the possibility that the coat might have white lapels.

The uniform of the drummers were probably white with the addition swallows nest on each shoulder. There were no other lace on the sleeves, etc.