It is not really known at what time this corps was created. However, the annals of the first Brunswick-Lüneburg troops in the middle of the XVIIth century the engineer are already mentioned. Until 1732, engineers were subordinated to the commander of the Hanoverian Artillery. On that year, they were formed in an independent corps under their own “chef”.

In March 1757, the Ingenieurkorps counted 19 officers and drivers.

During the Seven Years’ War, the successive chefs of the corps were:

Engineers were never assembled in a single corps during the campaigns but distributed between the field army and the various fortresses. 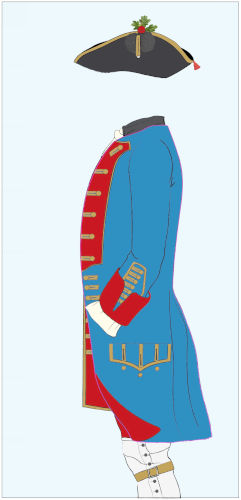 Engineers were equipped with a sword and a wooden stick.

According to Wissel, from 1759, engineers wore straw waistcoat and their coat was also lined straw.