Regiment of Foot Guards - Source: Gmundner Prachtwerk, a manuscript in the library of the Prince of Hannover

In 1631, when the Duke of Hanover signed a treaty with Gustavus Adolphus of Sweden, he raised a Guard unit. In 1648, at the end of the Thirty Years’ War, this unit was reduced to two “Palace Companies.”

In 1665, the regiment formed part of the Hanoverian contingent taken in Dutch pay. In 1666, the regiment was stationed in Brabant where it remained until 1669.

In 1671, the regiment took part in the siege of the city of Braunschweig.

In 1679, after the death of Duke Johann Friederich, Duke Ernst August replaced him as Duke of Hanover. He brought his Guard battalion with him. In October of the same year, the regiment marched to Hamburg which was threatened by the Danes.

In 1690, the three companies of the former “Osnabrück Battalion” and the two “Palace Companies” were amalgamated and formed the kernel of a new regiment counting two battalions.

Exceptionally, this regiment consisted of two battalions (line infantry regiments all counted only one battalion). However, there was only one regimental staff for the two battalions for a total of 1,620 all ranks. 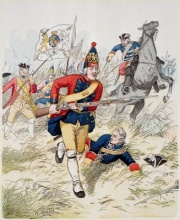 In the spring of 1756, the two battalions of the regiment joined the Allied reinforcement destined to Great Britain because King George II feared a French invasion. On May 21, they arrived at Chatham and then marched to Maidstone. By July 12, it was encamped on the at Coxheath near Maidstone. The regiment spent the rest of the year in Great Britain. At the beginning of November, it became clear that Brunswick-Lüneburg (aka Hanover) was more seriously threatened than England and it was decided to send the Hanoverian contingent back to the continent. Accordingly, on November 24, the regiment marched out from the camp at Coxheath by Rochester up to Chatham. Contrary winds considerably delayed their departure. Finally on December 5, they re-embarked at Chatham to return to Germany. On December 17, they disembarked at Cuxhaven and returned to the city of Hannover which was their garrison place.

From 1757, both guard battalions were usually assigned at the guard of the headquarters. On July 26, during the French invasion of Hanover, the regiment took part in the Battle of Hastenbeck where it fought in the second line of the left wing.

By mid February 1758, during the Allied winter offensive in Western Germany, the regiment was part of a small Allied force who advanced through Lüneburg to Amelinghausen. It then took part in the siege and capture of Minden. On May 26, the regiment was with Ferdinand's main force in the camp of Nottuln. On May 31, it accompanied Ferdinand in his offensive on the west bank of the Rhine. On June 23, the regiment took part in the Battle of Krefeld where it was deployed on the left wing under the command of Lieutenant-General Spörcken. In December, when the Allied army took its winter-quarters in Westphalia, the regiment was quartered in Münster where Ferdinand of Brunswick had established his headquarters.

In June 1759, the regiment was part of the main Allied army under the command of Duke Ferdinand of Brunswick. On August 1, it took part in the Battle of Minden where it was deployed in the first line of the 3rd column under Major-General Waldegrave. Misinterpreting orders, Waldegrave advanced straight upon the cavalry deployed on the left of the French centre. The first line of French cavalry (11 sqns) charged Waldegrave first line but was thrown back. The second line of French cavalry was equally repulsed though with more difficulty. Now the French reserve, consisting of the Gendarmerie de France and the Carabiniers, attempted a third attack upon the 9 brave battalions. It charged and broke through the first line of Allied infantry. However, the second line received them with a deadly fire and forced them to retire. The astonishing attack of the Allied infantry had virtually gained the day. In this battle, the regiment lost Lieutenant-Colonel von Ahlefeld, Captain von Winnigerode, Lieutenant von Götze and Lieutenant von Lützau, all wounded.

On November 28 of the same year (1759), the regiment was part of the force under the Hereditary Prince of Brunswick destined to dislodge the Würtemberger Contingent from Fulda and then to reinforce Frederick II in Saxony. This force set out from Marburg and marched to Kirtorf. On November 29, the force marched to Angersbach and Lauterbach. On Friday November 30, this force launched an attack on Fulda, forcing the Würtemberger Contingent to retreat precipitously southwards on Bruckenau in the general direction of Frankenland and Württemberg. On December 18, the Hereditary Prince at the head of his corps arrived at Erfurt. On December 25, the Hereditary Prince formed a junction with Frederick at Leipzig in Saxony.

On November 29, 1760, a skirmish took place at Hedemünden on the Werra between Major-General Breitenbach's detachment (Hanoverian Gardes (2 bns), Brunswicker Leib-Regiment with some cavalry and artillery) and the French garrison under Monfort who was forced to abandon the place and to take refuge in the woods of Münden. Part of the garrison entrenched itself in a redoubt along the river while the other part passed it by boats. The French then resisted all attempts to dislodge them from their entrenchments. The Allied finally retired into the town before retreating during the night. In this action, the Allies lost about 150 men, including 5 officers killed (Captain von Grote, Captain von Renne, Captain von der Deeken, Ensign von Bock and Ensign von Schoning) and 6 wounded.

On July 15 and 16, 1761, the regiment took part in the Battle of Vellinghausen where it supported the British grenadiers.

On Jun 24, 1762, the regiment fought in the Battle of Wilhelmsthal. In September, it retired to the Ohm.

Musicians of the regiment (oboists belonging to the staff and drummers belonging to each company) wore the British Royal Livery. They were clothed in red, lined, faced, and lapelled on the breast with blue, and laced with the royal lace (golden braid with two thin purple central stripes).

Sapherson Alan: A Basic Guide to Armies & Uniforms of the Seven Years War, No. 6 - Hanoverian