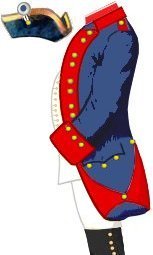 For this regiment, we think the old Max Emanuel pattern could have been taken out the arsenal and carried again. Please note that, as Ordinarfahne, the 1742-1745 pattern Type "2 (or even type "4") could have been carried, but without the double-head imperial eagle.