The unit was incorporated into the Prussian Army on September 28, 1741 as a dragoon regiment. It already existed since 1734 but was in the Württemberg service as a cuirassier regiment designated as “Kürassier-Regiment Duchess Marie Auguste”. In June 1742, the regiment arrived at Berlin. It was then stationed in Eastern Pomerania where, until 1784, it garrisoned Greifenberg, Massow, Naugard, Treptow an Rega and Wollin. It levied its recruits in the districts of Bütow, Lauenburg and Rummelsburg.

In 1744, during the War of the Austrian Succession (1740-48), the regiment ook part in the occupation of Prague; and in 1745, in the battles of Hohenfriedberg and Soor.

The regiment was disbanded on November 7, 1806 after the capitulation of Ratekau.

On August 26, 1756, when the Prussian Army proceeded to the invasion of Saxony, the regiment was part of the centre column led by Frederick II. More precisely, it belonged to Prince Moritz's Corps. The centre column had concentrated in the area of Brietzen and advanced unopposed upstream along the Elbe River by Torgau and Wittenberg, leaving Meissen to its left. On September 6, it encamped at Rothschönberg and finally reached Wilsdruf. On September 10, it joined the army of Prince Moritz von Anhalt-Dessau blockading Pirna. On October 17, after the capitulation of the Saxon Army at Pirna, the 4 squadrons (each counting 6 officers, 8 NCOs, 2 drummers, 100 troopers and 1 farrier) of the Saxon Graf Rutowsky Light Dragoons were forcibly incorporated into the regiment as a second battalion. Exceptionally, the former Saxon regiment retained its red uniforms.

On July 29, 1758, during the Prussian retreat after the failed invasion of Moravia, the regiment covered the crossing of the Mettau by the main army. On October 14, it was present at the Battle of Hochkirch where it covered the retreat of the Prussian Army.

On September 25, 1759, the regiment fought at Hoyerswerda. On October 29, it took part in the engagement at Pretsch. On November 20, 4 squadrons of the regiment took part in the Battle of Maxen where they were attached to Platen's Brigade deployed on the extreme right of the Prussian positions. Completely surrounded, the entire Prussian force finally surrendered as prisoners of war.

By May 24, 1760, the regiment counted only 7 officers, 15 NCOs, 3 drummers, 1 surgeon, 1 Fahnenschmied and 41 dragoons with 114 horses. During the summer, it was brought back to its full strength of 5 squadrons. On November 3, it took part in the Battle of Torgau.

In 1762, the regiment campaigned in Silesia. On July 21, it was at the Battle of Burkersdorf. On August 16, it fought in the Battle of Reichenbach. It then covered the Siege of Schweidnitz which surrendered on October 9. 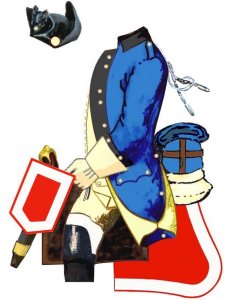 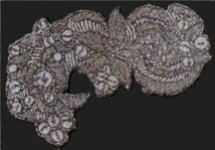 Drummers of the regiments wore the same uniform as the troopers but decorated around the lapels and the edges of the front, the rear, the side waist slit, the pocket flaps, the cuffs and the shoulders with a braid at the livery of Württemberg (white braid bordered by 2 outer red braids and 2 inner yellow braids, with a ventral pattern of red and black decorations).

Standards were made of damask. They were swallow-tailed and measured some 50 cm along the pole, 65 cm from the pole to the extremity of a point and 50 cm from the pole to the centre of the indentation. The cords and knots were of silver threads. The pole of the standard was a tournament lance (same colour as the field of the standard) reinforced with iron hinges. The golden spearhead wore the crowned monogram of Frédéric (FR).