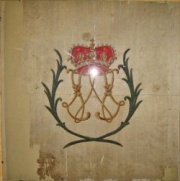 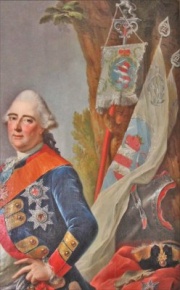 The Hessian colours prior to 1760 was more simple using the cypher or monogram of the reigning Landgrave Wilhelm VIII. Image shows one out of four on exhibition in the Hessian Army Museum, Bad Wildungen/Germany. Design is identical with all 4, silk colours are each one white (picture), crimson red, leave green, and the last being a faded yellow or paille/straw. The museum is unable to identify them, besides attributing them to the period of Wilhelm VIII. It would be great if someone would do it.

At the death of Landgrave Wilhelm VIII in 1760, the pattern changed and the use of the Hessian Lion was introduced. The Hessian Lion was a backward facing lion rampant striped red and white usually on a sky blue field. Examples of this new pattern appear in the background of Frédéric's portrait. It shows 1. Garde, and Garde du Corps. The painting is dated 1773. Background ermine cloak shows Hessian Order of Golden Lion, founded in 1770. By the American War of Independence, the monograms had shifted to the corners, flaming grenades to the side and the adoption of flames had occurred.