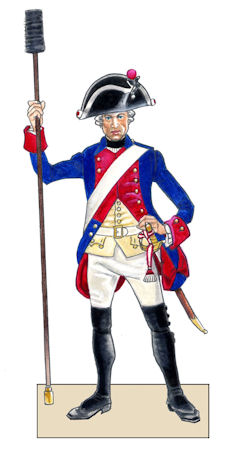 In 1756, at the beginning of the Seven Year's War, the Hessian artillery manned the field guns, the fortress guns as well as the battalion guns attached to the infantry. Two artillery companies were dedicated to the service of fortress guns and field artillery. The field artillery pieces were not standardised and consisted of guns of various calibers (3, 6 and 12-pdrs), 30-pdr howitzers and 60-pdr mortars. Some pieces were supplied by Great Britain and Prussia while others had been captured from the French. The Hessian artillery had a well-staffed artillery headquarters and support train.

In the Spring of 1759, when Ferdinand of Brunswick reorganised the Allied artillery, the Hessian artillery was organised in one heavy field battery, five field batteries (each of 8 guns), and one garrison unit. The necessary additional manpower was drawn from militia units.

In January 1760, at the death of Wilhelm VIII, the new landgrave Friedrich II changed the organization of the army. The reorganised Hessian battalions each had two 3-pdr guns with three horses per gun and an accompanying 3-horse ammunition carriage. Each guns was served by 11 artillerymen. In August, the Hessian artillery was reorganised once more. It was now subdivided into five field artillery companies:

In 1756, a detachment of 10 officers and 188 men with 16 guns accompanied the Hessian infantry sent to England. They returned to the continent early in 1757 with the Hessian contingent.

Officers had silver trim and buttons rather than the white trim and pewter buttons. Their cuffs and lapels were edged silver. They had embroidered silver buttonholes at the waist, in the small of the back, on pockets and above the cuffs. They also wore a silver sash interwoven with small red striping and a silver gorget.

NCOs wore the same uniform as the privates but had no shoulder strap and a silver edging on each cuff. They carried the Prussian style partizan. The standard staff was black.

By the Seven Years War the convention of wearing reversed colours had disappeared. Drummers now wore the same dark blue coat with white and red livery lace placed along the coat seams, in 7 inverted chevrons along the sleeves and around the 'swallows nests' on the shoulder. Very much a copy of the Prussian style.

Drum barrels were of polished brass and were decorated with the Hessian Lion. The drum cords were white and, for this regiment, the rim was a pattern of alternating white and sky blue diagonal stripes with a thin red stripe edging every second diagonal.