Under the direction of Gustavus Adolphus, Hessen became the first German state to raise Jägers.

In 1757, at the beginning of the Seven Years' War, the Jägers counted two companies.

By August 1759, two mounted companies had been added to the unit. These mounted troops were often used in conjunction with the Jägers as seen at the Combat of Sandershausen.

During the American War of Independence, the Jägers served in America, gaining an excellent reputation. So much so, that Frederick the Great purchased the services of key officers to train his own forces. By 1791, the force reached a size of four squadrons of horse and three battalions of foot.

Present at countless small actions and major skirmishes throughout the war.

On July 23 1758, a company of Jägers took part in the Combat of Sandershausen. It was placed on the right wing near the Fulda River and, throughout the encounter, it poured a deadly fire on the French infantry causing very heavy casualties. On October 10, two companies of this unit took part in the Battle of Lutterberg where they were placed on the left wing of the first line.

During the first half of 1759, the unit formed part of the Allied Army of Ferdinand of Brunswick. It was attached to the Reserve under the command of Freytag. On April 13, it took part in the Battle of Bergen where it formed part of the vanguard of the third column under the Duke von Holstein-Gottorp. In June, 4 foot companies and 2 mounted companies of the regiment were part of Imhoff's Corps operating in Hesse.

Privates were armed with a rifle (red leather strap) and a sword (brass hilt). 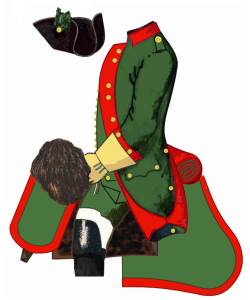 The mounted Jägers were also armed with a rifle but carried a sabre instead of a sword, they would have primarily fought on foot with their mounts in the rear.

Officers dressed as the rest of the troop with no difference in uniform besides the absence of shoulder straps and turnbacks. Officers of the mounted jägers had a folden aiguillette on the right shoulder.

NCOs wore the same uniform as the privates without shoulder strap with a gold edging on each cuff as their sole distinctives.