The regiment, then counting a single battalion, was raised in April 1748 to serve in the Netherlands. In 1754, it was increased to two battalions.

The grenadiers of the regiment were amalgamated with those of the Leibregiment to form the Grenadier Battalion von Stammer.

Throughout the Seven Years' War, the regimental inhaber was:

On July 26 1757, the regiment took part in the Battle of Hastenbeck where it fought in the first line of the left wing under lieutenant-General Imhoff.

On May 26 1758, the regiment was with the Allied main force in the camp of Nottuln. When Ferdinand of Brunswick crossed the Rhine during the night of May 31, the regiment remained at Brünen as part of Lieutenant-General von Imhoff's detachment charged to watch Wesel. On August 5 at the combat of Mehr, the regiment was part of Imhoff's force who repulsed the French attempt directed against the Allied bridgehead at Rees.

During the first half of 1759, the regiment formed part of the Allied Army of Ferdinand of Brunswick. It was attached to May's Brigade in the second line of the infantry centre. On April 13, the regiment took part in the Battle of Bergen where it was deployed in the first column under the command of the Hereditary Prince of Brunswick. In June, the regiment was still part of the Allied main army under the command of Duke Ferdinand of Brunswick. On August 1, the regiment took part in the Battle of Minden where it was mostly deployed in the second line of the 7th column under Major-General von Behr while a detachment was posted near Hille to guard the Eickhorst causeway crossing the peat bog. On November 28, the regiment was part of the force under the Heredity Prince destined to dislodge the Würtemberger contingent from Fulda and then to reinforce Frederick II in Saxony. This force set out from Marburg and marched to Kirtorf. On November 29, the force marched to Angersbach and Lauterbach. On Friday November 30, this force launched an attack on Fulda, forcing the Würtemberger contingent to retreat precipitously southwards on Bruckenau in the general direction of Frankenland and Württemberg. In this action, the regiment was attached to Bevern's column. On December 18, the Hereditary Prince at the head of his corps arrived at Erfurt. On December 25, the Hereditary Prince formed a junction with Frederick at Leipzig in Saxony.

During the war, the unit was also engaged and fought at Ziegenhain, Vellinghausen and Wilhelmsthal. 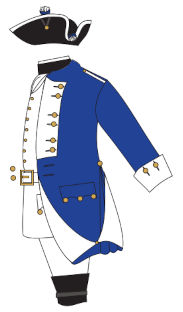 The drummers wore a dark blue coat with the collar, cuff, lapel and turnback the same as the troopers. The swallow nests on the shoulders were white while white lace edged the front of the coat.

N.B.: Kannik (see references) gives a yellow coat to musicians of all foot regiments of the Brunswicker Army.

The drum had a brass base carrying the Brunswick coat of arms with a rim decorated with blue and white diagonal stripes and with white cords.

Here is a tentative reconstruction based on the colours used by regiment von Rhetz in 1776 during the American War of Independence. Even though this regiment had a filiation with the regiment von Imhoff of the Seven Years' War, there is no certainty that the colours were the same.