The regiment was raised around Náchod/CZ in 1682 as a cuirassier regiment by Major-General (GFWM) Duke Julius Franz von Sachsen-Lauenburg according to a patent issued on March 6 of the same year. The regiment (10 companies) was reviewed on September 9 1682. Johann Alexander Count Noirquermes, formerly from Dünewald Cuirassiers, was appointed as lieutenant-colonel; Count Lanthieri, formerly from Metternich Cuirassiers, as Obristwachtmeister (major). Furthermore Dünewald Cuirassiers and Metternich Cuirassiers contributed an entire company. Finally, 206 men, including NCOs, were contributed by Mercy Cuirassiers, Dünewald Cuirassiers and Metternich Cuirassiers. After the review, the Duke Sachsen-Lauenburg returned to his estates and Lieutenant-Colonel Noirquermes assumed effective command. The regiment received its baptism of fire on August 2 1683 against Tököly's rebels near Cseklesz/HU. Afterwards, the regiment fought in the Battle of Vienna (September 12) and at Parkany (October 9). In 1684, it took part in the first siege of Ofen, In July 1685, it was at the siege of Neuhäusel and, in August, at the Battle of Gran and at the blockade of Kaschau. In 1686, it took part in the second siege of Ofen and in the Battle of Szegedin where Count Veterani distinguished himself at the head of the regiment. In 1687, the regiment was at the battle of Mohacz/Harsány where it pursued the enemy. On August 22, Count Noirquermes was appointed proprietor of the former Truchsess Cuirassiers, and Leopold Joseph Count Schlik was promoted to lieutenant-colonel and commander of the present regiment. In 1688, the regiment took part in the storming of Belgrade. After the death of the Duke Sachsen-Lauenburg, on October 5 1689, Johann Leopold Marchese Doria was appointed proprietor while Lieutenant-Colonel Schlik became proprietor of the former Löwenschild Dragoons. Franz Joseph Count Serényi was appointed as the new lieutenant-colonel of the present regiment. In 1690, the regiment was at the engagement of Kronstadt, and in December it took part in the enterprise against Gyula. In 1691, it fought in the Battle of Szalankamen.

The Marchese Doria died in December 1691 and the new proprietor of the regiment was, since January 2 1692, FZM Johann Franz Count Gronsfeld zu Brankhhorst. On November 1 1693, Count Serényi bought (50,000 florins) Porthen Dragoons from Philipp Jacob von der Porthen and was appointed proprietor of the unit. Meanwhile, Johann Baron Roo was appointed as the new lieutenant-colonel and regiment commander.

On June 8 169?, during a raid on Bihác, Lieutenant-Colonel Baron Roo was killed. He was replaced by Johann Flesse von Seilbig.

At the outbreak of the War of the Spanish Succession, in 1702, the regiment was at the siege of Landau and was assigned to the Army of the Upper Rhine under the King of the Romans (future Emperor Joseph I). The same year, it fought in the Battle of Friedlingen where it suffered heavy casualties. In June 1703, three of its squadrons took part in the Battle of Munderkingen under Prince Ludwig von Baden. For the campaign of 1704, the regiment was once more assigned to the Army of Prince Ludwig von Baden and took part in the combat of the Schellenberg and in various combats in the Black Forest. In August, it was at the siege of Ingolstadt where it was deployed in the Ober-Haunstadt between Feldkirchen to Gerolfing. Since 1705, the regiment fought against the insurgents in Hungary (Földvár, Sibó in 1705; Alsó-Szilvás and siege of Kaschau in 1706; Sibó again in 1708).

From 1716 to 1718, the regiment took part in the war against the Turks. In 1716, it fought in the Battle of Peterwardein and participated in the siege of Temesvar. In 1717, it was at the siege, then at the Battle of Belgrade where it suffered very heavy casualties.

In 1721, the regiment received one company (120 men) from the disbanded Galves Regiment.

During the War of the Polish Succession, the regiment was assigned to the main army of Prince Eugene of Savoy, operating on the Rhine.

From 1737 to 1739, it was involved into another war against the Turks as part of Count Khevenhüller's Corps. During the campaign of 1737, Lieutenant-Colonel Count Kufstein was lost. In 1739, at the end of the war, the regiment was stationed in Sieben-Bürgen (present-day Transylvania).

During the War of the Austrian Succession, the regiment was initially involved into the winter expedition of 1742 in Upper Austria and Bavaria, as well as in the siege and capture of Prague. From 1743 to 1745, it was assigned to the army operating in Germany and on the Rhine. For the campaign of 1746, it joined Count Browne in Italy and fought in the engagement of Guastalla on March 27 and at the battle of Piacenza on June 16. At the peace of 1748, the regiment was stationed in Hungary.

In 1779, the regiment was transformed in a dragoon unit. In 1798, it was numbered 3 and in 1802, 1. In 1860, it became a cuirassier regiment once more and received the number 9. Finally, it was re-transferred to the dragoons under the same number.

At the outbreak of the war, in 1756, the regiment was stationed in the Banat and counted 782 men and 776 horses. On September 20, it set off from Banat and joined Piccolomini near Königgrätz (present-day Hradec Králové/CZ). At the end of October, Piccolomini left Königgrätz and went to a new camp near Holohlavy/CZ. On November 9, the regiment took up its winter-quarters at Podiebrad (present-day Poděbrady/CZ) and Chlumetz (present-day Chlumec nad Cidlinou/CZ).

On June 18 1757, the regiment fought in the Battle of Kolin where it was deployed in the second line of the cavalry right wing in the brigade of Fürst Lobkowitz. During this battle, Lieutenant-Colonel Carl Baron Skrbensky was killed and Colonel Count Colloredo-Mels, wounded and taken prisoner of war. The regiment suffered heavy casualties (14 men dead, 82 wounded and 25 missing). Major Ignaz Baron Coulant zu Kolb was promoted to lieutenant-colonel. In October, one squadron of the regiment took part in the bold raid on Berlin led by the General of Cavalry Count Hadik.

In 1758, the regiment was detached to assist the Reichsarmee in the planned invasion of Saxony. On March 1, Colonel Colloredo-Mels and other officers returned from Prussian prisons. At the end of May, the regiment marched to the camp at Laun (present-day Louny/CZ). On October 1, Field-Marshal Daun recalled the regiment along with 5 battalions. On October 14, the regiment participated in the Battle of Hochkirch where it was deployed in the corps of the Prince Durlach on the right wing. It advanced under FML Duke Löwenstein against the Prussian corps of Retzow but was not involved in any action. The regiment then joined the Austrian corps who proceeded to the invasion of Silesia and to the unsuccessful siege of Neisse. On November 1, Count Colloredo-Mels was promoted to general, and Franz von Bosfort, formerly from the Erzherzog Ferdinand Cuirassiers, was promoted to colonel and commander, with Ignaz Baron Coulant zu Kolb as second colonel.

On January 30 1759, the regiment was reviewed at Weisswasser, it then consisted of 10 cuirassier companies and one carabinier company for a total of 884 men and 891 horses. It was then assigned to Daun's Army. At the beginning of April, the regiment was allocated to the corps of G.d.C. de Ville near Troppau (present-day Opava/CZ) and Jägerndorf (present-day Krnov/CZ). Later on, it was assigned to Major-General Zollern's Brigade deployed in Count d'Aspremont's Division, in the second line of the right wing. By mid August, the regiment was still part of Daun's Army posted in Silesia. On September 2, the regiment was at the Combat of Sorau but saw no action. At the end of October, Colonel Baron Bosfort of the regiment commanded a detachment sent on the road to Leipzig. On November 17, Bosfort's detachment was placed at Friedrichstadt near Dresden. On 20 November, the carabinier company participated in the “Finken-Fang” of Maxen. At the beginning of December, Daun's Army took up its winter-quarters, the regiment went to Leuba, its carabiniers to Friedrichstadt/Dresden.

On March 15 1760, the regiment was reviewed at Leuba. It then consisted of 934 men, 894 horses (1 carabinier company and 6 squadrons). In April, it was detached to FML Lacy's Corps which was posted near Boxdorf in Saxony. The corps afterwards undertook several manoeuvres. By July, it was near Radeberg. Lacy marched to Plauen and effected a junction with the Reichsarmee. At the beginning of August, Lacy followed the Prussians to Görlitz. On August 18, the regiment arrived at Kratzau (present-day Chrastava/CZ) where it remained until the end of the month. On September 7, in the combat of Kunzendorf, Colonel Bosfort distinguished himself at the head of the vanguard consisting of the Horse Grenadiers and Carabiniers companies. On November 3, the regiment fought in the Battle of Torgau where it suffered heavy casualties. Colonel Bosfort, Major Marquis Botta, Carabinier-Captain Kausche, two lieutenants and 19 troopers were wounded while Major Marquis Botta, Rittmeister Till, lieutenants Rongeot, Marklowsky and Carabinier-Lieutenant Rautenstrauss and 21 troopers were taken prisoners. In mid December, the regiment took up its winter-quarters at Helmsdorf.

For the campaign of 1761, the regiment was allocated to the corps of G.d.C Count O´Donell. On May 11, it arrived at Bautzen and, on May 27, at Wittgendorf where it was brigaded with Erzherzog Maximilian Cuirassiers and Prinz Savoyen Dragoons under Major-General Belloni. On June 4, the recently ransomed Major Marquis Botta captured a Prussian post at Nimptsch in Silesia and made some bounty. In mid July, Belloni's Brigade supported Loudon's Corps at Dittersbach. Loudon failed to rally with the Russians and Buturlin retired behind the Oder River. On October 1, Loudon successfully undertook the Storming of Schweidnitz. The regiment was then sent to Saxony where, along with Jung-Modena Dragoons, Prinz Savoyen Dragoons and Splényi Hussars, it was allocated to the corps of Major-General Count Esterházy. On October 26, the regiment was at Marklissa (present-day Lesna/PL). On December 23, it took up its winter-quarters at Gebhardsdorf (present-day Giebultow/PL).

In 1762, the regiment remained in Silesia and saw no action. On April 30, Second Colonel Ignaz baron Coulant zu Kolb died. On November 24, an armistice was concluded and the army took up its winter-quarters. The regiment went to Kolleschowitz (present-day Kolešovice/CZ).

In May 1763, the regiment (805 men) set off for Transylvania where it was posted around Mediasch (present-day Medias/RO). 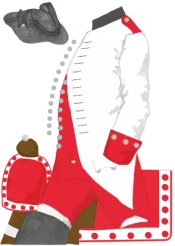 Uniform in 1762 - Source: Richard Couture and Ibrahim90, from an illustration of Raspe

The Bautzener Bilderhandschrift of 1762 shows a silver lace on the tricorne, a red neckstock and straw breeches.

Donath illustrates a very different pattern for the lace of the saddlecloth and sabretache: black braid bordered white, with white rhombus within the black braid.

No information found yet.