The regiment was created from Jacobite followers on December 3 1688 when James II fled from Great Britain and took refuge at the Court of Louis XIV. It was initially designated as the “Queen's Guards” and was commanded by the Marquis d'Autrin.

In March 1689, the regiment accompanied James II when he sailed from Brest and landed in Kinsale in Ireland with an army of 20,000 men, captured Dublin and vainly laid siege to Londonderry. The regiment then took part in the capture of Athlone. In 1690, it took part in the battle of the Boyne. In 1691, it was with the army assembled at Kinsale and fought in the battle of Aughrim. After the capitulation of Limerick, the regiment returned to France.

In 1698, after the Treaty of Ryswick, the regiment entered in the French service where it was designated as “Bourke Infanterie”.

By the time of the War of the Spanish Succession, the regiment counted a single battalion.

In 1714, the regiment was part of the 40 battalions sent to assist the Spanish army in the siege of Barcelona. On 11 September, it took part in the storming of Barcelona. It then remained in this city as garrison.

On 18 May 1715, after the Treaty of Utrecht, the regiment was transferred to the Spanish Army where it was initially known as “Regimiento del Principe de Astúrias” (aka “Wachop Infantry”).

In 1717, the regiment, as its first service in the Spanish Army, took part in an expedition to reconquer Sardinia, landing at Pula and laying siege to Cagliari. On 10 February 1718, the regiment was renamed “Regimiento de Irlanda”. It later sailed from Pula to Sicily, landed at Punta Solanto, occupied Palermo, laid siege to Messina and fought in the Battle of Milazzo. In 1719, it took part in the victorious Battle of Francavilla. In 1720, it returned to Barcelona.

In 1726, the regiment was transferred to the District of Valencia.

In 1732, the regiment took part in the reconquest of Oran. It then formed part of the garrison of the place. In 1733, it defended Oran against the Moors and then re-embarked and was transported to Majorca. The same year, it incorporated the disbanded Waterford Infantry.

In 1737, the regiment was transferred to Fuente de Cantos.

In 1740, on the eve of the War of the Austrian Succession, the regiment marched to Barcelona. In 1741, it embarked for Italy where it took part in the occupation of Tuscany. In 1742, it reinforced the garrison of Mirandola. In 1743, it fought in the Battle of Campo Santo. In 1744, it took part in the defence of Naples; in 1745, in the siege and capture of Tortona; in 1746, in the Battle of Rottofreddo. In 1747, the regiment returned to Spain and was sent to garrison Majorca. In 1748, it re-embarked for Barcelona.

In 1754, the regiment was transferred to Galicia.

The regiment was disbanded in 1818.

In 1756, the regiment embarked at Algeciras and was transported to North Africa to reinforce Ceuta, threatened by the Moors.

In 1757, the regiment defended Ceuta when the Moors invested the place in July.

In 1759, the Moors finally abandoned the siege of Ceuta, decamping on 11 November. Relived by other troops, the regiment returned to Barcelona.

In March 1762, the regiment marched from Barcelona to Old Castile. On April 17, it entered into Zamora. It was then incorporated into the second division of the army assembling for the planned invasion of Portugal. On May 5, this division crossed the frontier at Brandilanes and occupied Constantim. The regiment took post at Ifanes to cut the line of retreat of the garrison of Miranda do Douro. This garrison defended the place stubbornly but surrendered when its main powder magazine exploded. The regiment then entered into Miranda by the breach opened by the artillery. Two days later, a detachment of the regiment occupied Bragança. On July 15, the entire regiment marched to Ciudad-Rodrigo where it rested for a few days. On July 20, it marched to Galegos to take part in the Siege of Almeida. On August 25, the place surrendered with the honours of war. On September 9, the regiment marched to Cerveyra. On September 29, the grenadiers of the regiment were detached under General Count de Saldueña to support Brigadier O'Reilly who had been charged to reconnoitre the Portuguese entrenchments in the Talladas. On 4 October, when the Spanish army marched on Sarcedas, the regiment was assigned to the defence of the small place of Castelo Branco where it remained until November 14. Peace was then concluded and, on November 25, the regiment retired to Old Castile. 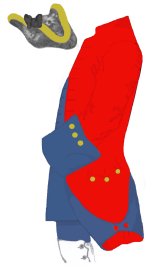 An illustration shows a grenadier drummer of Irlanda Infantry in 1762 with a red coat, a red waistcoat and red breeches. Collar, cuffs and turnbacks were blue. He had white gaiters and buttons were made of brass. Collar, cuffs and the front of the coat were edged with a red and white checkered pattern. The drum was blue with red rims and white cords. The barrel was painted with the royal arms and crown, surrounded by the collar of the Order of the Golden Fleece. On both sides of the Royal Arms were two white colors with a red Burgundian cross.

Volker Scholz for information on colours and on the uniforms of drummers.