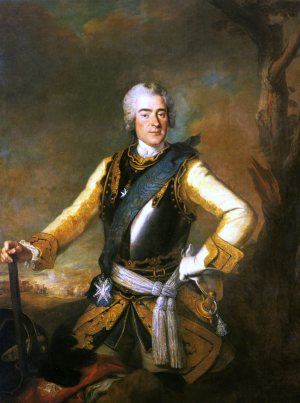 Johann Georg was an illegitimate son of August the Strong, King of Poland and Elector of Saxony, and Ursula Katharina of Altenbockum, by marriage Princess Lubomirska. At that time, the Lubomirski family was ranked among the most influential families of Poland. He received from his father the name Johann Georg and the characteristic features of thick eyebrows. A few days after his birth, his mother was created Princess of Teschen. Johann Georg grew up in his mother's houses in Dresden and in Breslau (present-day Wroclaw).

In 1714, the 34 years old Princess Lubomirska, was back again in Dresden where she lived receiving a pension.

On September 1718, Johann Georg moved to Rome. He received a complete education by the Jesuits, like a large part of the Noble Cadets of the age. At first, he received the title of Prince of Teschen and, by an express desire of his mother, Johann Georg started a spiritual/political career.

Johann Georg entered into the Order of Malta or Knights of Malta (a Roman Catholic lay religious order, traditionally of military, chivalrous and noble nature).

In 1722, Johann Georg received the Great Cross of the Order of Malta. His title was soon changed in, Chevalier de Saxe.

In December 1724, Johann left Rome. He was accompanied by the Saxon Lieutenant-colonel Barnabas O’Dempsie to Lunéville, where he was received to the residence of the Duke von Lothringen.

In May 1726, by order of the Grand Master of the Order, Johann Georg was sent to Malta.

In October 1727, however, Johann Georg left the Order and was recalled to Dresden. His father had different plans for him. The King of Poland and Elector of Saxony was building up a modern army capable to compete with the Prussian one.

On January 8 1728, Johann Georg was commended with the Polish Order of the White Eagle and he entered into the Saxon Army like some of his older half-brothers (for example Moritz de Saxe and Friedrich August Rutowsky).

On December 12 1729, Johann Georg was appointed the rank of colonel in the Saxon Army.

The garrison service ended when his father, the King, suddenly died in Warsaw on February 1st 1733. The Saxon Army and the Chevalier de Saxe regiment moved to Poland to “support” the election of the half-brother Friedrich August II as King of Poland.

During the ensuing Polish Succession War the Saxon Army remained in Poland for three years.

In the beginning of 1734, Emperor Karl VI asked Saxony to provide a Kreis contingent for the war against France. The treaty was concluded in January 1735 and it was decided that a corps of 6,000 men was to join the Imperial army under the Prince Eugene of Savoy. The Saxons had waited until actions in Poland were completed. The prince was at the head of his Dragoon Regiment. He received a wound in Timoc.

On August 11 1740, Johann Georg was promoted to the rank of Generallleutnant der Kavallerie. On September 1 of the same year, he was recalled in Dresden to assume the command of the elite regiment of Garde du Corps.

During the following years, a suicidal politic was pursued by the Saxon Prime Minister Heinrich Count von Brühl. In the name of economy the Saxon Army was unilaterally halved from over 30,000 men down to around 18,000. All the cuts were decided against the opinion of the Field Marshal Rutowsky and his second in command, Johann Georg von Sachsen.

In 1756, when the Prussian Army launched the invasion of Saxony, the Saxon Army was ill prepared to sustain a war. Too small, dispersed, demoralized and without provision the only action possible was to concentrate in Pirna and to hope in the Austrian help. On October 15 1756, with the capitulation, the Saxon Army virtually ceased to exist.

Johann Georg spent the years of war in Dresden like his half-brother and superior officer Count Rutowsky.

After the long struggle of three successive wars, a reform of the Saxon Army became a priority. The task was initiated under the short reign of the new Elector of Saxony Friedrich Christian by his brother Xavier de Saxe and continued during the Regency.

On November 27 1764 Johann Georg acquired the so-called Zinzendorfschen Garden -located out of the gates of the city of Dresden- for the sum of 14,000 dollars. In the middle of the garden, a magnificent palace in rococò style was built up, by the later garden-master builder Frederick August Krubsacius. This palace was (after the Moszinskapalais and the Brühlschen Palais in Dresden-Friedrichstadt) the third "Maison de Plaisance" of the aristocracy out the city walls of Dresden. The interiors were not excessively big.

On the January 30 1770, Johann Georg made his farewell of the army and left the city, moving to his garden property. However, in spite of his big seclusion, he didn't renounce the usual and big royal suite.

In 1774, after a long disease, the Chevalier de Saxe died, aged sixty-nine. He was buried in the Roman Catholic Cemetary (Innerer Katholischen Friedhof) in Dresden. In his will, the Chevalier declared his half-sister, Fredericka Alexandrine, Countess of Cosel (by marriage Countess Moszinska) his sole heir.

Dr Marco Pagan for the initial version of this article