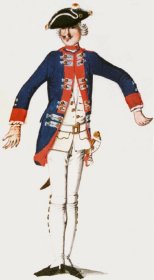 A field battalion was raised on June 1 1713 for Major-General Anton von Pannewitz from garrison units. On September 27 1715, this field battalion formed the basis of the newly formed Infanterie Regiment von Schlabrendorff. The new regiment levied its recruits in Lebus and Sternberg.

During the Great Northern War, the regiment took part in the operations of the Prussian army in Pomerania and landed on the island of Rügen.

From 1729, the regiment garrisoned Berlin.

During the War of the Austrian Succession, the regiment joined the Prussian army in Silesia in 1741 and fought at Mollwitz (April 10). In the autumn of the same year, it was sent to Bohemia. In 1742, it occupied the Bohemian towns of Königgrätz and Pardubitz. In 1745, it fought at Hohenfriedeberg (June 4) and Soor (September 30).

The numbering system (Stammliste) was first used by Leopold I., Fürst von Anhalt-Dessau (Der alte Dessauer) in the Dessauer Spezifikation from 1737. Around 1780 the numbers were used in the printed Stammlisten, still with some variations for the fusilier regiments. It became official by "Cabinets-Ordre" from October 1, 1806. The present infantry regiment was attributed number 25.

The regiment was disbanded in October 1806 after the capitulation of Prenzlau.

On August 26 1756, when the Prussian army was ordered to proceed to the invasion of Saxony, the regiment was part of the centre column led by Frederick II. More precisely, it belonged to Margarve Karl's Corps. The centre column had concentrated in the area of Brietzen and advanced unopposed upstream along the Elbe River by Torgau and Wittenberg, leaving Meissen to its left. On September 6, it encamped at Rothschönberg and finally reached Wilsdruf. While the Prussian Main Army moved forward to engage an Austrian army at Lobositz (October 1), the regiment remained in the Pirna Country to maintain the blockade of the Saxon Army which surrendered on October 17.

In the Spring of 1758, the regiment took part in the invasion of Moravia and in the Siege of Olmütz. On August 25, it fought in the Battle of Zorndorf where it formed part of the first line of the right division led by Count zu Dohna. On October 14, the regiment fought in the Battle of Hochkirch where it formed part of Retzow's Corps near Weissenberg.

In 1759, during the Russian campaign in Brandenburg, the regiment took part in the bloody Battle of Kunersdorf.

On September 17 1760, the regiment took part in the Combat of Hochgiersdorf. On November 3, attached to Prince Henri's Corps, it fought in the Battle of Torgau where it was almost annihilated.

In 1761, the regiment was part of the Prussian army entrenched at Bunzelwitz. Later during the year, it was transferred to the East Prussian theatre of operation where it took part in the failed attempt to relieve Colberg.

On July 21 1762, the regiment fought in the Battle of Burkersdorf and from August to October, took part in the siege and recapture of Schweidnitz. 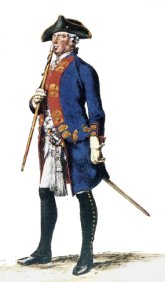 The drummer lace consisted of a white braid decorated with a complex crimson, white and black pattern.