This Grenzinfanterieregiment (Frontier Infantry Regiment) was raised in February 1746 by Joseph Philipp Count von Guicciardi as the “Liccaner Grenz-Infanterie-Regiment” 1 in the Generalate of Karlstädter. The regiment was then known as the “Joseph Philipp Graf von Guicciardi Liccaner Grenz-Infanterie-Regiment” and consisted of six battalions totalling 9,000 men.3

In 1751, the regiment was reorganised and then consisted of two companies of grenadiers and four battalions, each counting five companies of fusiliers of 200 men.4

In wartime, the companies of grenadiers were detached from the regiment and converged into a Grenadier Corps (ad hoc battalions). However, these converged battalions seem to have been employed mostly as elite light troops. Only in some extreme cases would they fight among the elite line infantry battalions.

At the outbreak of the Seven Years War, the regiment was organised as follows:

Tactically a Grenz-Husar squadron was assigned to a foot battalion of the same Generalate.6

The regiment recruited in the regions of Lika and Korbavija in the south-eastern part of the Generalate of Karlstadt (in present-day Croatia).7 Its regimental staff was located in Gospic, its garrison place.8

During the Seven Years' War, the Chefs of the regiment were:

Regimental numbers were introduced only in 1769 when this regiment was designated as "I.R. 60".

Service during the War9

In 1756, one battalion of the regiment joined the Austrian Reserve Corps led by Count Draskovic in Bohemia. Later during the same year, a second battalion was sent to join the Austrian Field Army operating in Bohemia. By the end of September, the first battalion had joined Field-marshal Browne's Army at Budin (present-day Budyně nad Ohří). On October 1, two battalions of the regiment took part in the Battle of Lobositz, one of them, along with a battalion of Karlstädter-Oguliner Grenzer, stubbornly defended the Lobosch Hill till they were forced to abandon their positions by vastly superior Prussian forces. Meanwhile the other battalion was attached to Draskovic's Reserve. In the night of October 17 to 18, a detachment of 500 men, under the command of Lieutenant-Colonel Gideon Ernst Baron von Loudon attacked the town of Tetschen defended by two hussars squadrons under Lieutenant-Colonel Strozzi. Loudon captured 100 horses with their saddlery but the Prussian hussars managed to take refuge into the castle. Loudon then retired towards Kamnitz.

On January 1 1757, Lacy, who was posted in the region of Reichenberg (present-day Liberec), detached six combined coys of Karlstädter-Szluiner Grenzer and Karlstädter-Lykaner Grenzer under the command of Colonel Kleefeld seconded by Lieutenant-colonel Herberstein and Lieutenant-Colonel Loudon along with 200 Karlstädter Grenz-Hussars under Colonel Count Mitrovsky and Lieutenant-Colonel Knezevic to attack a Prussian outpost in Ortric, defended by 400 men. In the ensuing combat, Major Blumenthal, commanding the Prussian detachment was killed, and most of his detachment wounded or taken prisoners. In the night of February 19 to 20, a large detachment of the regiment took part in the attack of the Prussian positions on the left bank of the Neisse (present-day Noteć River). Loudon crossed the frozen Neisse River at the head of the grenadier company of the regiment, 400 commandeered men from various regiments and 200 Splényi Hussars. He then stormed a redoubt defended by 2 guns and 70 men and entered into the town of Hirschfelde. However, the frontal attack conducted simultaneously was driven back and Loudon was forced to abandon the town. On May 6, during the Prussian invasion of Bohemia, 2 battalions and 1 grenadier company of the regiment fought in the Battle of Prague where they were deployed in the Reserve in Count Petazzi's Brigade. During the battle, they were sent to occupy the Heights of Hloupetin which were attacked by a large Prussian force. After the battle, they took refuge in Prague. On Friday June 24, Loudon at the head of a battalion of the regiment attacked a Prussian convoy near Welmina (probably present-day Velemín). The wagons of the convoy were quickly formed in a wagenburg. A wagon transported General Manstein who had been wounded at Kolin. Manstein bravely defended himself, refusing to surrender, but was cut down. The rest of the defenders finally surrendered as prisoners of war (Colonel Kleist, Marquise de Varenne, Major Putkammer and Winterfeldt, along with 6 other officers and 146 privates). On July 3, part of the regiment took part in another engagement at Welmina. On July 28, a detachment under Loudon took part in an attack on the baggage of Keith's Corps which was on its way from Linai to Nollendorf. In this engagement, the Austrians captured 1 gun, 6 ammunition carts and 40 baggage wagons. At the beginning of August, a detachment of the regiment formed part of Loudon's Corps operating in Southern Saxony. On August 8, it took part in the storming of a redoubt near Gottleuba. On September 7, when General Nádasdy attacked Winterfeldt's isolated corps in the Combat of Moys, a detachment of the regiment was with the vanguard in front of the right wing under the command of Lieutenant-General Petazzi. In October and November, detachments were at the Siege of Schweidnitz, serving as garrison after the capture of the fortress. On November 22, part of the regiment might have taken part in the Battle of Breslau where it would have been attached to Nádasdy's Corps. On December 5, two battalions of the regiment took part in the Battle of Leuthen where they were attached to the vanguard of the right wing. For his conduct during this campaign, Colonel Gideon Ernst Baron von Loudon received the Maria-Theresien Order along with Field Marshal Daun.

On April 20 1758, part of the regiment was among the light troops detached by General Buccow, under the command of Colonel Brentano, to attack Frei-Infanterie de Angelelli at Liebau (present-day Lubawka) where Major Lezzeny distinguished himself. The expedition succeeded and the Austrians captured 4 officers, 47 men and 5 guns. On May 6, Captain Ziska of the regiment captured 100 horses near the Prussian camp of Celakovic. On June 17, during the Prussian invasion of Moravia and the Siege of Olmütz, 1,000 men of the regiment formed part of the corps under the command of General Saint-Ignon who launched a surprise attack on Wisternitz inflicting heavy losses to Bayreuth Dragoons. On July 26 or 27, the regiment under Colonel Vela engaged Pannewitz Infantry near Königgrätz, capturing 28 prisoners and 2 guns. On July 31, a battalion of the regiment under Major Vorberg took part in an engagement at Sebastianberg. By October, 1,812 men of the regiment were attached to Major-general Vela's Corps encamped on the Stromberg. On October 14, during the Battle of Hochkirch, these men formed part of the Reserve under the command of the Prince of Baden-Durlach.

At the beginning of the campaign of 1759, part of the regiment was attached to de Ville's Corps who was protecting Moravia. On May 1, this detachment was attacked and partly captured at Arnoldsdorf (present-day Gmina Głuchołazy). On May 6, part of the regiment successfully repulsed a Prussian force who had attacked Graf Renard Uhlanen at Hennersdorf (probably Dolní Branná). In August, during the Russian campaign in Brandenburg, a detachment of the regiment formed part of Loudon's Corps who reinforced the Russian and fought alongside with it in the bloody Battle of Kunersdorf where it was deployed in the first line of the right wing. At the beginning of November, this detachment followed Loudon who retired to the camp of Neutitschein. On November 20, a detachment of the regiment took part in the Battle of Maxen. In December, the battalion encamped at Neutitschein was attached to Draskowitz's Corps.

In 1760, as part of Loudon's Corps, a battalion of the regiment took part in the campaign of Silesia. On March 15, after the end of the armistice which had been signed for the winter, this battalion took part in an unsuccessful raid against the positions of Generals Goltz and Le Grand in Silesia. It also took part in a raid on Ratibor. On June 23, this battalion fought in the Battle of Landeshut. In the second half of July, part of the regiment took part in the siege and capture of Glatz (present-day Kłodzko) where, led by Lieutenant-Colonel Warsberg, it distinguished itself on July 26 during the storming of the place. On August 15, it was at the Battle of Liegnitz. The same year, another battalion was attached to Lacy's Corps operating in Saxony.

On October 1 1761, part of the regiment took part in the storming of Schweidnitz where it attacked the Wasserfort.

Until recently we had no information on the uniform worn by this unit at the outbreak of the Seven Years' War. Thanks to the kind authorisation of the Heeresgeschichtliches Museum in Vienna, Vladimir Brnardić, a member of our group, has had access to the Delacre Bilderhandschrift, a rare contemporaneous manuscript depicting the uniforms of the entire K. K. Army around 1756-57. For this reason, we can now present the uniforms of troopers circa 1752 and in 1762. 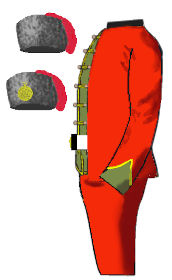 Uniform in 1752 - Source: Dal Gavan from a template by Richard Couture

Privates were armed with a slightly curved sabre, a musket and a bayonet. 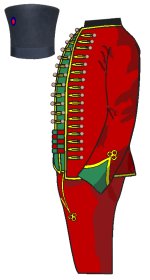 Uniform during the Seven Years War - Source: Richard Couture from a template by David at Not By Appointment

Privates were armed with a slightly curved 58 cm long brass hilted sabre31 with a white knot and a cord of a different colour for each company; a Model 1754 musket (151 cm long, 112 cm long barrel, 18,3 mm calibre, 4,9 kg); and a bayonet ???. Each soldier carried 36 musket balls and 6 shrapnel bullets.32 Privates also carried a haversack and a canteen. Additional ammunition and kettles were transported in the wagons of each company.

Finally, the Bautzener Bilderhandschrift of 1762 illustrates a very different uniform, the differences were:

It is possible that the old red and green uniform and the new white uniform were both simultaneously in use in the regiment towards 1762.

Officers wore uniforms of the same colour as those of the privates but were distinguished by a black tricorne laced gold; a Western style coat with vertical pockets, square cuffs; and yellow Hungarian boots.

Officers wore a black and gold sash or a gold sash with tassels at the waist, over the dolman and under the coat. The black and gold sash could be made of strictly separated layers and then intertwined in knots or in a kind of knitwear; while the entirely gold sash was made of heavy knit of fine shiny silk.33

When the Grenzer Regiments where formed they adopted the yellow 1745 pattern flag, with the black Doppeladler carrying the Imperial shield and edged in black/red/yellow/white flames, which measured 1.8m x 1.4m. The senior company carried a white Leibfahne displaying the Madonna and Christ on the obverse.

From 1756 each battalion carried two yellow Ordinarfahnen, except the first battalion which carried a white Leibfahne and one Ordinarfahne.

However, it seems unlikely that any were carried in the field