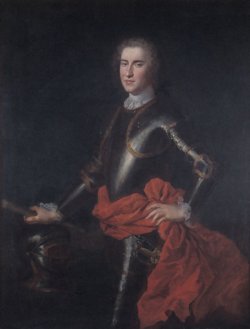 James Francis Edward Keith was born at the Castle of Inverugie near Peterhead in Scotland on June 16 1696. He was the second and youngest son of William Keith, 9th Earl Marischal, and of Mary Drummond, the daughter of James Drummond, 4th Earl of Perth.

His family was narrowly associated with the Stuarts and James and his elder brother took part in the Jacobite uprising of 1715. On November 13, James behaved with great resolution and bravery at the Battle of Sheriffmuir. At the suppression of the rebellion, his family having lost its titles, he went into France where he studied mathematics under the celebrated M. de Maupertuis. He also made himself perfect master of the military part of geometry. From Paris, he set out on his travels into Italy, Spain, Portugal and Switzerland. On his return to Paris, the Tsar of Russia, who was then in town, invited him to enter his service which Keith then refused.

In 1719, Keith was volunteer in the French Army at the storming of Vigo where he received a dangerous wound. From Paris, he went to the Court of Madrid where, by the interest of the Duke of Liria, he obtained a commission in the Irish Brigade, then commanded by the Duke of Ormond.

Keith accompanied the Duke of Liria in his embassy from the Court of Spain to Russia which introduced him into the service of the Tsarina who gave him a commission of brigadier general, and soon after that, that of lieutenant-general. Keith served in the Russian service from 1728 to 1747.

Keith served under Count Munich against the Turks as lieutenant-general. In 1737, he led a body of 8,000 men with great distinction at the Siege of Ochakov where he received a wound in the thigh. To cure this wound, Keith made a journey from Petersburg to Paris. As soon as he recovered, he visited London where he was very well received by the king.

On his return to Russia, in 1741, Keith soon took part in the war who had ignited against the Swedes where he fought in the Battle of Villmanstrand on August 23. Marshal Lacy and himself were instrumental in this Russian victory. He then became governor of Ukraine.

During this period, Keith enjoyed the favour of the Tsarina Anna Ivanovna. After her death in 1740, Keith's luck turned. He was at the head of army of 30,000 men near Petersburg when Tsarina Elizabeth Petrovna and her Chancellor Bestuzhev-Ryumin seized power. Soon after the accession of Empress Elisabeth, war broke out once more against the Swedes and Keith was placed at the head of an army. When peace was finally signed with Sweden, the empress sent Keith as ambassador to Stockholm. Soon after, he was promoted field marshal in the Russian army.

To escape from the intrigues of the court, Keith asked for leave.

In July 1747, Keith was authorized to leave the Russian service. Soon afterwards, he entered into the service of the King Frederick II of Prussia who received him in the most gracious manner. On September 18 1747, Keith was named field marshal in the Prussian army. Furthermore, Keith was invested with the Order of the Black Eagle.

In 1749, Keith became governor of Berlin. He enjoyed a large revenue from these cumulated functions.

In 1756, at the outbreak of the Seven Years' War, Keith accompanied Frederick II when he proceeded to the invasion of Saxony. Keith then supervised the blockade of Pirna. He also distinguished himself at the Battle of Lobositz on October 1.

On May 6, 1757, during the Battle of Prague, Keith commanded the Prussian corps posted on the left bank of the Moldau and did not take part in the battle. Later during the same year, he defended Leipzig against overwhelmingly superior forces. On November 5, he seconded Frederick II at the Battle of Rossbach.

From May to July 1758, Keith commanded the siege corps during the Siege of Olmütz. On July 5, during the Prussian retreat after the failure of the invasion of Moravia, Keith fell ill and had to abandon his command. However, he soon re-assumed command on July 10. He fell sick again in mid-August. He was able to join back the Prussian Army in the fall. Together with Prince Moritz von Anhalt and other generals, he vainly tried to persuade Frederick not to encamp in the highly exposed town of Hochkirch. During the night of October 14, the Austrians launched a surprise attack on the Prussian camp at Hochkirch. During the ensuing battle, Keith was mortally wounded. He was initially buried in the churchyard of the Village of Hochkirch.

In 1759, his coffin was transferred to the crypt of the church of the garrison of Berlin.