A new regiment of three battalions was raised in 1741 and allocated to Colonel Daniel von Bourdon. Each battalion counted five companies of 150 men each. In 1745, at the death of its colonel, the regiment was subdivided into three distinct regiments, each counting a single battalion of seven companies. The present regiment became the property of Count von Kielmannsegg.

In 1747, during the War of the Austrian Succession (1740-48), the regiment was sent to the Austrian Netherlands. In March 1748, it took part in the affair of Rosenthal not far from Berg-op-Zoom. At the end of the year, it returned to Hanover.

In March 1757, the regiment returned to its garrison place. It soon joined the Allied army on the Weser. On July 26, during the French invasion of Hanover, the regiment took part in the battle of Hastenbeck where it was deployed in the second line of the left wing under the command of Lieutenant-general Imhoff.

In March, during the Allied winter offensive in Western Germany, the regiment was at the siege and capture of Minden. On May 26, the regiment was with Ferdinand's main force in the camp of Nottuln. On May 31, it accompanied Ferdinand in his offensive on the west bank of the Rhine. On June 23, the regiment took part in the Battle of Krefeld where it was deployed in the centre in Lieutenant-General von Oberg's Brigade. This brigade was ordered to make diversion towards Sankt-Tönis. In August, during the retreat of the Allied army, the regiment formed part of the rearguard and participated in a combat against three French dragoon regiments near Kleve.

In June 1759, during the French offensive in Western Germany, the regiment was part of Wangenheim's Corps who had taken position at Dülmen in Westphalia to observe the movement of a French corps under the Marquis d'Armentières. On August 1, the regiment took part in the Battle of Minden where it was deployed in Wangenheim's Corps between Kutenhausen and the Weser, in the first line of the infantry centre. At the end of August, the regiment fought an action against the Chasseurs de Fischer near Wettern.

In 1763, the regiment garrisoned Stade. 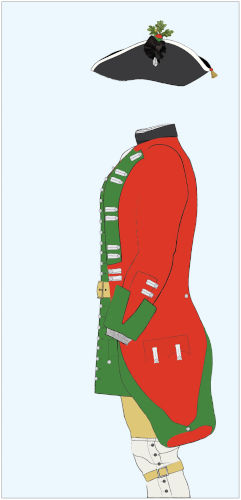 Wissel mentions that the distinctive colour of the regiment was changed from grass green to white in 1761.

The drum pattern had hoops in alternating green and red diagonal stripes, white drum cords over a brass drum with the Arms of Hanover in the centre.

Regimental Flag: Green field. A crowned wreath within which a sword and shield armored warrior stands. Ciphers and crowns in the corners with scroll below crown reading MISCETUR DECORI VIRTUS. Hereafter, we present an illustration from the Reitzenstein Sammlung, dating from circa 1761 (left) and the interpretation of Hannoverdidi (right).