Privy Councillor, Knight of the Sovereign Military Hospitaller Order of Saint John of Jerusalem of Rhodes and of Malta 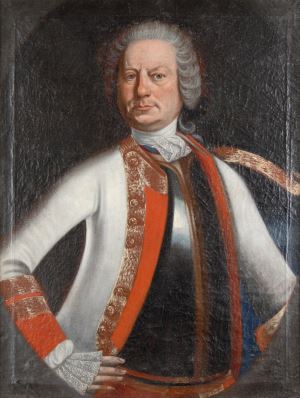 The Kolowrat family was one of the most important and eldest Bohemian aristocrat families.

Kajetan Franz was born on December 8 1689 as the ninth of ten children. His father was the Hofkanzler (Court Councillor) of Bohemia, Johann Franz Count Kolowrat; his mother, Eleonora Claudia Countess d'Anquisola.

When Kajetan's father died in 1692, his son did not inherit any estate. He earned a living as a page at the Imperial Court.

In 1709, Kajetan joined the Imperial Army where he probably served in O'Gilvy Infantry (disbanded in 1748). His military career progressed slowly.

On February 26 1732, after 23 years, Kajetan finally reached the rank of colonel in O'Gilvy Infantry where he assumed command until 1737.

In 1734, during the War of the Polish Succession, Kajetan campaigned in Italy where he attracted the attention of FM Königsegg. On August 1 1737, on Königsegg's recommendation, Count Kajetan Kolowrat was appointed proprietor of the future Infanterie Regiment No. 17. He would remain proprietor of this regiment for 32 years, until his death, but he was rarely with his regiment during campaigns.

On November 17 1741, at the beginning of the War of the Austrian Succession, Count Kolowrat was promoted to lieutenant-fieldmarshall (FML). In 1743, Count Kolowrat commanded the Imperial troops who laid siege to Eger (present-day Cheb/CZ) occupied by the French. The place surrendered on September 9.

On April 30 1757, during the Seven Years' War, after the death of FZM Piccolomini (January 25 1757), Count Kolowrat briefly commanded the Imperial army encamped around Königgrätz (present-day Hradec Králové/CZ). He also replaced him in the function of military commander of Moravia and lived in Brünn (present-day Brno/CZ).

Count Kolowrat died in Brünn on October 1 1769 and was buried in the Church of the Capuchins at Brünn (the same church where the famous Pandour Colonel Franz von der Trenck had been buried).

As Knight of the religious Sovereign Military Hospitaller Order of Saint John of Jerusalem of Rhodes and of Malta, Kajetan Count Kolowrat never married and had no children.

The Kolowrat family was one of these families (like the Württemberg) whose members fought on opposite sides during wars. During the War of the Austrian Succession, Kajetan's brother Philipp (1688–1773) was on the side of Elector Charles-Albert of Bavaria, who was crowned in 1741 as Emperor Charles VII and fought in the First Silesian War on the Prussian side. After the victory of Imperial Army over the Franco-Bavarian forces, Philipp incurred the displeasure of Maria Theresa and had to leave Prague. Through the good position of his brother Kajetan, Philipp finally managed to recover the favour of the empress.

Dr. M. Mžykova for the photo of the portrait of Kajetan Franz Count Kolowrat-Krakowsky taken at the Castle of Březnice in the Czech Republic