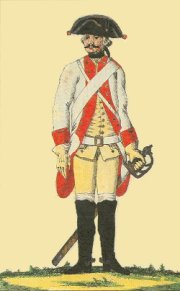 The regiment was raised in 1683 as the Regiment zu Pferde Graf Joseph Franz von Gronsfeld.

In 1691, the regiment was transformed into a cuirassier regiment.

The regiment counted four squadrons of two companies each and had an authorised strength of 585 men and 22 staff. The regiment consited of 61 contingents and was a prime example of a motley crew:

N. B.: The Baden-Baden contingent (36 men) was in fact a cuirassier company (nominal strength of 40 men) belonging to the Margraviate of Baden-Baden. It had been converted from a dragoon company in 1732 and usually garrisoned in Rastatt.

In August 1757 the regiment had an effective strength of 570 men.

The regiment was owned by:

From 1757 to 1762, the regiment served with the Reichsarmee against Prussia.

In 1757, the regiment was with the Reichsarmee operating in Thuringia and Saxony. In August, this army combined with a French contingent under the Prince de Soubise to form the Franco-Imperial Army for the planned reconquest of Saxony. By August 5, the regiment counted 483 men fit for service. On November 5, it fought in the Battle of Rossbach.

On March 31 1759, between Stockheim and Mellrichstadt, 2 squadrons of Prussian Black Hussars (Ruesch Hussars) belonging to the vanguard under the Hereditary Prince of Brunswick charged sword at hand an enemy detachment consisting of the Hohenzollern Cuirassiers and of 1 battalion of the Blau Würzburg Infantry. They first routed the cuirassiers, then charged the infantry, taking many prisoners. By mid-August, during the Austro-Imperial campaign in Saxony, the regiment was attached to Hadik's Corps. On September 8, it took part in the Combat of Zinna where it was deployed in the second line of the cavalry right wing. On September 21, it probably took part in the Combat of Korbitz where it would have been deployed in the centre of Hadik's Corps. 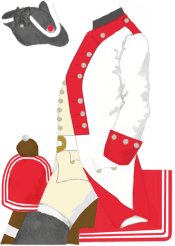 In 1734 the insignia were different. It is possible that this design was still worn partially:

Troopers were armed with a sabre and a carbine.

N. B.: The various contingents of the Swabian regiments had partially their own uniforms. This is confirmed for the contingent of Baden-Baden, which was similar to the uniform described above but seems to have had some specific distinctives, which have unfortunately not been recorded.

The following description is based on the uniform worn by the trumpeters of the contingent of Baden-Baden in 1794.

Four standards per regiment, each with a golden finial and a brown pole.

Here follows a tentative reconstruction of these two standards.

Several contingents carried (additionally?) their own standards. This was the case of the Baden-Baden contingent. This standard was probably taken into the field.

N.B.: In 1771, when the last Margrave of Baden-Baden, August Georg Siempert, died, Margrave Carl Friedrich of Baden-Durlach re-united both margraviates (according to a contract of inheritance signed in 1765) and formed the Margraviate of Baden. From this time, the new Margraviate of Baden had two griffin as supporters. Because the new Baden state was ruled by a native Durlach Margrave, these were in fact the originally Baden-Durlach supporters. Because the Baden-Baden Arms were abandoned in 1771, it is almost forgotten, that the Baden-Baden Arms had, contrary to Baden-Durlach, a griffin and a lion as supporter.

N.B.: Originally, the present-day city of Kempten consisted of two independent cities, the Imperial city of Kempten and the princely abbey of Kempten (the so-called "twin cities"). Both cities were built next to each other, the Imperial city was a protestant territory and surrounded by the princely abbey, which was a catholic territory. This situation caused many conflicts, unarmed and armed. In 1802, parts of Swabia were incorporated into Bavaria, and the new government merged the two cities.