This fusilier regiment was given to Frederick II on October 17 1740 by his uncle the Duke of Sachsen-Eisenach. It entered into Prussian service at Magdeburg but was transferred to Berlin and then to Frankfurt-an-der-Oder and Küstrin in 1741. Its second battalion was completed only in 1742.

During the War of the Austrian Succession, the regiment defended Glogau and Breslau in 1742. In 1744, it took part in the siege of Prague. It then assembled at Breslau and Liegnitz where it assumed garrison duty till 1756. It levied its troops in the districts of Goldberg, Hainau and Neumarkt in Lower Silesia.

After the Seven Years' War, the regiment formed part of the garrison of Schweidnitz.

The regimental numbering system (Stammliste) was first used by Leopold I, Fürst von Anhalt-Dessau (Der alte Dessauer) in the Dessauer Spezifikation from 1737. Around 1780 the numbers were used in the printed Stammlisten, still with some variations for the fusilier regiments. It became official by "Cabinets-Ordre" from October 1, 1806. The present infantry regiment was attributed number 40.

The regiment was disbanded in 1806 after the capitulations of Erfurt and Magdeburg.

In 1756, the regiment was part of the Army of Silesia under Field-Marshal Schwerin. During this campaign, this army conducted operations in Eastern Bohemia.

In the Spring of 1758, the regiment took part in the invasion of Moravia and, at the end of June, fought in the Combat of Domstadl. On August 25, the regiment fought at the Battle of Zorndorf where it formed part of the second line under Forcade de Biaix. Its second battalion supported the large battery on the extreme right wing. They were attacked and routed by Horvat Hussars. On October 23, Dohna, who was following up the retreating Russian army, detached the regiment and 200 hussars under the command of Kleist back to Landsberg to check an incursion of the cossacks.

On January 1 1759, the regiment was at Damgarten. It took part in the offensive against the Swedes and in the captures of Demmin and Anklam. In May, it marched to Stargard. At the end of June, the regiment was part of the Prussian force who advanced on Thorn. On July 23, it fought at the Battle of Paltzig where it was attached to Hülsen's Division deployed in the centre in the first line of infantry. It suffered heavy losses in this battle. A few weeks later, on August 11-12, the depleted regiment did not take part in the Battle of Kunersdorf. It was rather assigned, as part of Flemming's Brigade at the guard of the bridges on the Oder at Görtz.

On July 6 1762, the regiment was probably present at the Combat of Adelsbach as part of Neuwied's left column. From August to September, the regiment took part in the Siege of Schweidnitz.

Privates were armed with a short musket, a bayonet and a curved blade sabre. 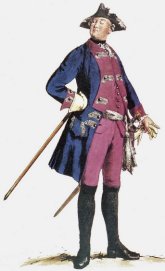 Uniforms of officers were very similar to those of privates with the following exceptions:

The laces of the drummers consisted of a 2.9 cm wide lace and a 1.6 cm narrow lace both of the same pattern (white braid decorated in rose).

Colonel colour (Leibfahne): White field. Centre device consisting of a rose medallion surrounded by the necklace the Order of the Black Eagle and surmounted by a gold crown. The medallion is decorated with a black eagle holding a sword and lightning bolts surmounted by a white scroll bearing the golden motto "Pro Gloria et Patria". Corner monograms (crowns, laurel wreaths, "FR" ciphers) and grenades in gold.

Regimental colours (Kompaniefahnen): Rose or violet field. Centre device consisting of a white medallion surrounded by the necklace the Order of the Black Eagle and surmounted by a gold crown. The medallion is decorated with a black eagle holding a sword and lightning bolts surmounted by a rose scroll bearing the golden motto "Pro Gloria et Patria". Corner monograms (crowns, laurel wreaths, "FR" ciphers) and grenades in gold.