In 1744, the regiment became the Kurfürstin-Leibregiment-Dragoner.

By the time of the Seven Years War, the regiment counted 3 squadrons, each consisting of 3 companies for a total of 468 men.

In 1756, the regiment garrisoned Mannheim.

In 1758, the regiment was augmented to 5 squadrons or 10 companies for a total of 800 men organised as follows:

In 1778, the regiment became known as “Kurfürstin”.

In 1790, the regiment changed nam once more to become “1. Dragonerregiment Kurfürstin”.

In 1758, when Pfalzgraf Friedrich Michael von Zweibrücken assumed overall command of the Reichsarmee, he brought the regiment with him.

On May 11 1759, during the Prussian incursion in Franconia, the regiment was part of Riedesel's rearguard during the retreat of the Austro-Imperial army towards Kulmbach. In the afternoon, this rearguard was attacked by a Prussian detachment under the command of general Platen, 522 men of the regiment were taken prisoner during this engagement. 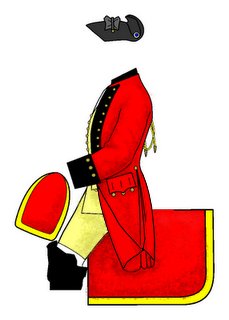 Troopers were armed with a straight bladed sabre (brass hilt), a musket and 2 pistols.

Cavalry guidons were not affected by the unification of Palatinate and Bavaria in 1777 nor by the issuance of standardized colours in 1788. Both guidons retained a Palatine heraldry, so even though the guidons illustrated hereafter date from 1784, they should have been quite similar at the time of the Seven Years' War, to the exception of course of the year 1784 appearing on the scrolls.

below the crest, the collars of four orders, from top to bottom: 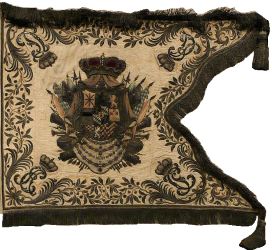 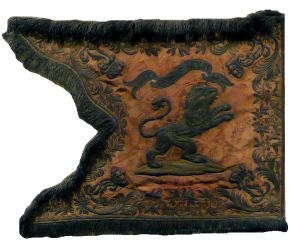