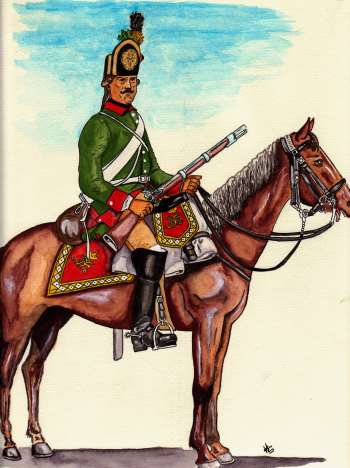 On February 1 1758, G.d.C. Benedikt Daun exchanged his dragoon regiment (Benedikt Daun Dragoons) for the Löwenstein Cuirasiers belonging to Christian Philipp Fürst zu Löwenstein-Wertheim. Löwenstein immediately added 12 companies of "Light Dragoons" to his new regiment (Alt-Löwenstein Dragoons). The exchange and the addition of these companies had both been authorised by a decree of the Hofkriegsrat (War Council) also dated February 1. The 12 new companies, organised in 6 squadrons, had their own staff and their own colonel but were still part of the Alt-Löwenstein Dragoons.

This (part of the) regiment was called "Jung-Löwenstein" to distinguish it from its parent unit, but it always fought alongside "Alt-Löwenstein" (therefore it was the strongest cavalry regiment of the Austrian Army at the Battle of Hochkirch).

In a letter dated January 6 1759, the Fürst Löwenstein asked for the authorisation to increase his 12 companies of light dragoons by 8 additional companies and thus form a full dragoon regiment. His request was accepted through a letter dated January 14. This same letter also promoted Count Stainville to major-general; Karl Baron Voith to colonel and commander; and Major Reischach was promoted to second lieutenant-colonel (the appointed lieutenant-colonel, Duke Liechtenstein, was at that time in Prussian prison). In January, the new regiment counted 1,640 men and 1,640 horses. By a decree dated March 22 of the same year, the unit was separated from its parent regiment (Alt Löwenstein). By the same occasion, the unit was transformed into chevauxlegers. With 10 sqns, the new chevauxlegers regiment was stronger than a usual regiment of dragoons. The Fürst of Löwenstein-Wertheim remained proprietor of this new chevauxlegers regiment while Johann Anton Josef Count Saint-Ignon was appointed proprietor of the former Alt-Löwenstein Dragoons.

In 1761, the "Löwenstein-Wertheim Chevauxlegers Regiment" was reorganised as a regular dragoon regiment with 6 squadrons and a horse grenadiers company.

In June 1758, immediately after its creation, the regiment joined the Corps of General Count St. Ignon in Moravia. It distinguished itself during the Siege of Olmütz when, on June 17, it fell on 7 squadrons of the Prussian Bayreuth Dragoons near the town of Wisternitz. In this engagement, it captured a pair of silver kettledrums, 8 officers and 257 troopers. For this feat of arms, the regiment received the privilege to carry the captured kettledrums while other Austrian dragoons carried only ordinary drums. Thanks to the glorious behaviour of the regiment in this occasion, its commander Colonel Marquis de Choiseul-Stainville, was particularly appreciated. He was promoted general in 1759 and field marshal lieutenant (FML) in 1760 and entered into the French service. After the encounter of Wisternitz, the regiment took part, on June 30, in the attack against a Prussian convoy heading for Olmütz during the Combat of Domstadl where Captain Sauer of the regiment attacked the Prussian escort with 100 troopers. They captured all their flags, 5 guns and some 600 prisoners. After the capture of most of the convoy, General Siskovitz sent Major Baron Voith of the regiment to carry the news to Field-Marshal Daun and then to the court at Vienna. On September 16, the regiment was also involved in the combat of Ahrensdorf not far from Stolpen. On October 11 at Radeberg, Lieutenant-Colonel Johann Joseph Fürst Liechtenstein and 30 troopers were captured and brought into captivity. On October 14, at the Battle of Hochkirch, the regiment was one of the most active unit during the pursuit of the defeated Prussian army.

In the campaign of 1759, the regiment under the good leadership of Colonel Baron Voith, took part in the enterprise on Liebau on May 21 but it was unable to attack the enemy in the rear as planned because of the presence of many swamps. In July, Major Sauer of the regiment was sent as courier to the Russian army by Loudon to bring them the news that Frederick II was on his way with his army. On August 12, at the Battle of Kunersdorf, the regiment played an important role and captures two 12-pdr guns. At the decisive moment of the battle, while the Russians were fighting on their left flank and falling into disorder, General Loudon led the Austrian infantry in action. Meanwhile, Lieutenant-Colonel Joseph Count Kinsky (the colonel being wounded) charged at the head of the regiment. They hit the Prussian cavalry in flank and threw it into disorder. They rapidly reformed and launched an attack on the Prussian infantry, disordering them as well. Major Sauer was the first, at the head of the squadrons of the regiment, to reach the entrenched Russian, after attacking the Prussian cavalry five times. The regiment distinguished itself very much in this battle but it also suffered very heavy casualties. Lieutenant Scotti and 25 men were killed while Colonel Baron Voith, Major Klemens Baron Plettenberg, Captain Petterneck, Lieutenants von Veld, von Dahl, Grünagel and Hartmann and 78 men were wounded. Furthermore, Captain Aldegonde, Lieutenants Fishhagen, Rothern and Sabiersky and 59 men were reported missing. Lieutenant-Colonel Kinsky was charged by General Loudon to bring the news of the victory to the Imperial Court at Vienna. In November, the regiment accompanied Loudon's Corps when it left the Russian army and retired to Moravia. The regiment was among the vanguard under Major-General Count Bethlen.

In the campaign of 1760, the regiment took part in the enterprise against Neustadt in Silesia where it successfully attacked the right flank of the Prussian rearguard, consisting of 300 men under General Golze. Part of the Prussian rearguard was captured along with 5 wagons. On June 23, the regiment fought with great distinction at the Battle of Landeshut where it broke a Prussian square and captured a gun and two flags. Colonel Baron Voith with an incredible courage had boldly charged this square at the head of his regiment. General Fouqué was standing inside this square. He was wounded during the fight and captured. He gave his sword to Colonel Voith. In the same battle, Lieutenant-Colonel Kinsky was leading a party of volunteers who charged five Prussian grenadier battalions. For his behaviour during this battle as well as for his conduct at Kunersdorf the previous year, Kinsky received the Cross of the Maria-Theresien-Orden (1762). At Landeshut, the regiment lost Lieutenant Werniezek and Gillich and 11 men killed; and 16 men wounded. On July 17, Major Baron Berlichingen with a party of 70 dragoons and hussars was captured by Rittmeister Roznick of the Prussian Malachowsky Hussars. On August 15, the regiment fought at the Battle of Liegnitz where Colonel Baron Voith organised the retiring units to maintain an ordered withdrawal. During this battle, the regiment lost 1 man killed, 12 men wounded (including Colonel Voith) and 7 men missing. On September 30, a squadron of the regiment was at the combat of Lindenwiese where it behaved courageously, fighting against elements of the Krockow and Alt-Platen Dragoon Regiments.

In the campaign of 1761, a detachment of 100 dragoons of the regiment was attacked at Friedberg by the Prussian Black Hussars on May 5, 39 men were captured by the Prussians. During this campaign, Lieutenant-Colonel Sauer was detached in Saxony with a mixed unit as part of Field-Marshal Lieutenant Baron Ried's Corps. He distinguished himself by bold actions against Prussian posts at Krumbach and Beimerich. On October 1, the regiment took part in the storming of Schweidnitz where his Lieutenant-Colonel Count Kinsky particularly distinguished himself.

In the campaign of 1762, Lieutenant-Colonel Sauer was stationed on the right bank of the Elbe. He attacked the Prussian advanced posts on the other bank of the river. On August 2, the regiment took part in the encounter of Töplitz. In September, it participated in various operations of the Reichsarmee in Saxony. On October 29 at the Battle of Freiberg, Colonel Voith attacked a Prussian redoubt and captured 3 officers and 30 men. 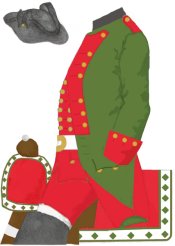 The Bautzener Bilderhandschrift shows a black casquet decorated with a golden Imperial eagle and a yellow plume instead of a tricorne for troopers. It also shows buff breeches.

Ordinair-standarte (before 1764 ?): Swallow tailed with gold fringes and gold embroideries

Harald Skala for explanations on the confusing origins of the regiment