The regiment was raised on July 1 1747 by the Comte de Frieze.

During the War of the Austrian Succession, the regiment served in Flanders in 1748.

At the beginning of the Seven Years War, this Saxon regiment counted only one battalion.

During the Seven Years' War, the regiment ranked 115th and was under the command of:

On January 18 1760, when the German Infantry was reorganised, the regiment was disbanded. Its only battalion was incorporated into Royal Bavière Infanterie.

By August 1 1757, the regiment was in Germany with the Army of the Weser. At the end of the year, it took its winter-quarters in the first line of the French Army at Müden on the Aller River and in Hanover.

At the end of January 1758, the regiment was assigned to the army that Louis XV planned to send to Bohemia for joint operations with the Austrian Army. However, when Ferdinand of Brunswick launched his offensive in West Germany in February, the regiment retired on the Rhine with the rest of the French Army. From March 30 to April 4, it was in the second line of Clermont's Army in the camp of Wesel on the Lower Rhine. By July, it had been transferred to Soubise's Army assembling near Friedberg in Hesse. It was assigned to guard the artillery train.

From June 1759, the regiment took part in the French offensive in West Germany, escorting the artillery train. 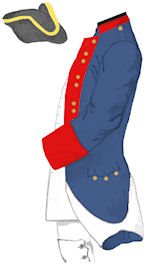 Ordonnance Colours: blue field and a white cross; each canton was sown with golden fleurs de lys; centre device consisting of the crowned arms of the Dauphine.