The regiment was raised during the Franco-Spanish War (1635–59), on October 21, 1654 by the Cardinal Mazarin who also assumed colonelcy. It was formed with 16 companies taken from existing units and received the name of “Mazarin-Français” which had previously been worn by the regiment now known as Bretagne Infanterie before the forced exile of Mazarin. At the time of the creation of the regiment, the Spaniards occupied part of the provinces located to the north of Paris and it became very important to keep the places still obeying the king. The regiment was assigned to the guard of the town of La Fère.

After the war, the regiment assumed garrison duties in Dixmude which it evacuated on February 24, 1660 to return to La Fère. On March 25, 1661, Mazarin being dead, the regiment adopted the name of the town of La Fère. A name which it kept until the Revolution.

After the war, the regiment was reduced to two companies (colonel and lieutenant-colonel). All other companies were incorporated into Champagne Infanterie.

After the war, the regiment assumed garrison duties in Freiburg.

In 1727, the regiment participated in a training camp on the Meuse.

In 1754, the regiment was encamped in Alsace.

During the Seven Years' War, the regiment ranked 35th and was under the command of:

In 1756, the regiment was sent to Provence as part of the Reserve Corps for the army charged with the conquest of Minorca. However, the reserve did not embark and remained on the Mediterranean Coast.

By August 1, 1757, the regiment was garrisoning Cannes, Valauris et Le Canet in Provence. It remained cantoned on the Mediterranean Coasts during the entire war.

In 1762, the regiment was transferred to Vannes.

In 1763, the regiment was initially transferred to Collioure and Mont-Louis, and later to Perpignan. 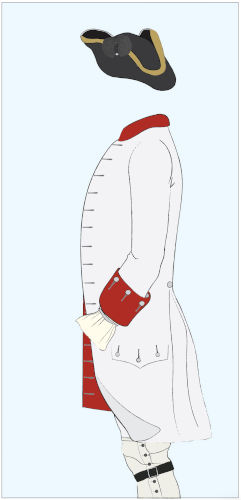 Menguy, Patrice: Les Sujets du Bien Aimé (a great website which seems to have disappeared from the web)