The regiment was created on September 15 1684 and wore the name of the Province of La Marche. Indeed, expecting a coalition to soon form against France, Louis XIV had raised 30 new regiments from September 1 to 30 for the defence of the various places of the realm. By raising one regiment a day, he avoided any problem of precedence among these new regiments.

During the War of the Polish Succession, the regiment took part in the relief of Danzig in 1734 and was made prisoner by the Russian Army.

During the War of the Austrian Succession, the regiment initially served in Bavaria and on the Lower Rhine in 1742 and 1743. On June 27 1744, it took part in the Battle of Dettingen. In 1746, it was stationed on the Meuse, then it took part in the siege of Namur and fought at Raucoux on October 11.

By August 1 1757, the regiment had been transferred to Germany. At the end of the year, it took its winter-quarters in the first line of the French army at Langingen on the Aller River. 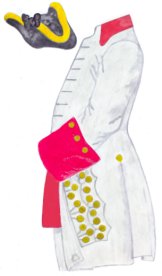