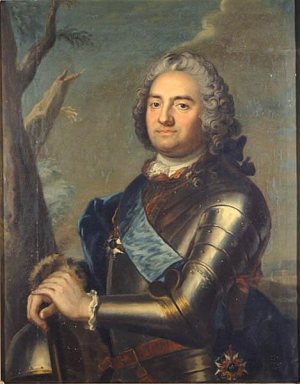 On October 28 1704, his father was killed in the battle of Punitz and Jakob Albrekt Lantingshausen remained his sole male descendant.

In 1718, Lantingshausen became cornet in the Hallands Infantry Regiment and shortly afterwards lieutenant in the same regiment.

In 1718 and 1719, Lantingshausen took part in the campaigns in Norway, distinguishing himself in a combat against the Danes.

In 1720, when the Hallands Infantry Regiment was disbanded after the Great Norhtern War, Lantingshausen was transferred to a regiment of dragoons where he became captain. This dragoon regiment was equally disbanded.

In 1724, Lantingshausen entered into the French service and joined a foreign regiment stationed in the French border province of Alsace. For several years, he studied administration, soon gaining the reputation of a capable and skilled officer.

In 1736, Lantingshausen was selected by the Archduchess of Pfalz-Zweibrücken as governor of her two sons. One of these was destined to become a Swedish crown prince with the support of Charles XII's sister Ulrika Ellionora. However, the Russian empress intervened to make sure that her own protégé”, Adolf Frederic the Fürstbishoff (prince bishop) of Lübeck, would inherit the throne of Sweden.

On the eve of the War of the Austrian Succession, Lantingshausen re-entered into the French service. On April 15 1745, at the battle of Pfaffenhofenhen, he made a good impression on the French commanders and was promoted brigadier.

In 1746, Lantingshausen returned to Sweden where he joined the “Hats Party”.

In 1747, Lantingshausen was appointed major-general in the Swedish Army. He also assumed command of an infantry regiment of conscripts in Gothenburg (present-day Göteborg). He was considered as a very able organiser.

In 1752, Lantingshausen left the Swedish army.

In 1757, at the outbreak of the Seven Years' War, Lantingshausen rejoined the Swedish Army as a lieutenant-general. He was made responsible for the transport of Swedish troops to Pomerania. Soldiers embarked at Karlskrona, Dalarön (south-east of Stockholm, present-day Haninge), Göteborg (on the west coast of Sweden), Umeå in the north and in the Finnish ports of Jacobstad and Vasa.

In November 1758, Lantingshausen was appointed commander-in-chief of the Swedish field army operating in Pomerania.

At the beginning of 1759, during the Prussian winter offensive in Pomerania led by Manteuffel, the Swedes lost Demmin (January 18) and Anklam (January 21). In late spring, Lantingshausen launched a counter-offensive against the Prussians. Finally, on August 21, the Swedish army crossed the Peene marking the border between Swedish and Prussian Pomerania. On September 10, the Swedes won the naval combat of Neuwarp in the Stettiner Haff. This allowed them to conquer the town of Usedom, where the later commander of the Swedish light brigade Jacob Magnus Sprengtporten, captain of the grenadiers, stormed the city and took a lot of Prussian prisoners. The Swedish offensive against the Oder islands represented the greatest Swedish success of the war. Indeed the Swedes captured 1,750 Prussian prisoners and 130 heavy guns, mortars and cannons as well as the largest part of the Prussian flotilla.

At the beginning of 1760, during the campaign in Pomerania, there was heavy fighting between Lantingshausen and Manteuffel. The latter initially had the upper hand but later on, Lantingshausen aggressively chased Manteuffels troops back to Anklam. The Swedes bivouacked at Peenedamm and then launched a surprise attack on Anklam which they recaptured taking General Manteuffel prisoner along with 150 of his men. In the spring, several Swedish nobles left the army to participate in the Swedish four chambers parliament. In the following summer, Lantingshausen tried an offensive against the Ückerline in an attempt to seize Prussian magazines and to feed his army on enemy country. On November 4, Lantingshausen asked to be relieved of his command. The same year, Lantingshausen received the title of baron.

Lantingshausen had to wait until the summer of 1761 to be relieved of his command. Ehrensvärd arrived in Pomerania in July and found the Swedish troops well trained and organised by Lantingshausen. There was 5% sick soldiers, the best figure in the entire war in Pomerania. The same year, Lantingshausen became Governor of Stockholm.

Lantingshausen was a hard working man, preparing himself and pondering every decision that he made, but he was not a natural leader as for instance the much more aggressive Ehrensvärd. Lantingshausen's motto was: “Nobody's slave, nobody's tyrant”.