As per a royal decree dated January 20 1694, each province of Spain had to raise a provincial tercio of 1,000 men to reinforce the army. Accordingly, the Province of Leon raised the “Tercio Provincial Nuevo de Leon” which assembled in Coruña. On January 4 1695, the tercio embarked aboard the San Augustin and the Leon Blanco and was transported to the frontier of Navarra where it was assigned to the garrison of Pamplona. Soon afterwards, it marched to Catalonia where it took part in the blockade of Palamós before joining the garrison of Barcelona. In 1697, it took part in the defence of Barcelona who capitulated on 10 August.

After the Treaty of Ryswick, in 1698, the tercio assumed garrison duty in Barcelona but was soon transferred to Galicia.

By 1700, the tercio garrisoned Coruña. On 2 December, a company of grenadiers was formed.

During the War of the Spanish Succession, in 1703, the tercio joined the Army of Extremadura. In 1704, it took part in the invasion of Portugal, in the capture of Salvatierra and Idanha-a-Nova, in the conquest of Monsanto and in the siege of Castelo Branco, in the storming of the entrenchments of the Allies near Sárcedas where a Dutch division under the Count of Athlone was routed and two Dutch battalions taken prisoners; in 1705, in the defence of Alcántara where it became prisoners of war but was later exchanged and returned to Badajoz and then to Old Castile. In 1707, the tercio was transformed into a regiment designated as the “Regimiento de Leon”. It served once more on the frontier of Portugal, taking part in an engagement near Salamanca and in the assault against Ciudad-Rodrigo. In 1708, the regiment initially garrisoned Valencia de Alcántara. In December, a detachment of the regiment took part in a raid conducted by General Don José de Armendariz, capturing Idanha-a-Nova, and storming and burning Monforte. In 1709, the regiment campaigned once more in Portugal, fighting in the Battle of La Gudiña. In October 1710, a detachment of the regiment was assigned to the column of General Don José Antonio Montenegro who captured by surprise Miranda do Douro, taking 400 prisoners. The regiment then joined the army assembling at Plasencia and marched into New Castile. On December 9, this army stormed Brihuega and, on December 10, won a decisive victory at the Battle of Villaviciosa. The regiment was then sent back to the Army of Extremadura. In 1711, the regiment garrisoned Ciudad-Rodrigo. In 1713, it joined the Army of Aragon. In 1714, it campaigned against the insurgents in Catalonia. A large part of the regiment was captured by a party led by the Caballero del Poal and brought to the Castle of Genebret where the soldiers were shot while the officers were brought to Cardona where they suffered gross outrages.

In 1715, the regiment was stationed in Galicia. In 1718, it was sent to Navarra where France had made itself master of San Sebastian and Fuenterrabia.

In 1720, the regiment marched to the camp of Gibraltar and was later sent to Ceuta on the coast of North Africa to relieve the place besieged by the Moors. In 1721, the second battalion remained in Ceuta as garrison while the first returned to Gibraltar. In 1723, the entire regiment was reunited in Ceuta. In 1724, it returned to Spain.

In 1732, the regiment formed part of the expedition who reconquered Oran. It then remained there till 1735.

In 1735, during the War of the Polish Succession, the regiment formed part of the reinforcements sent to Italy. A detachment took part in the siege and capture of Porto Ercole. The regiment was at the sieges of Mirandola and Revere. In 1736, it sailed back to Barcelona.

In 1744, during the War of the Austrian Succession, the regiment took part in the naval combat of Cape Toulon. In 1745, it disembarked at Málaga and detachments assumed garrison duty in various places on the coast of North Africa.

In 1750, the regiment was sent to Ceuta but soon returned to Valencia where it would remain until 1757.

In 1757, the regiment was transferred from Valencia to Galicia where it would remain until 1765. 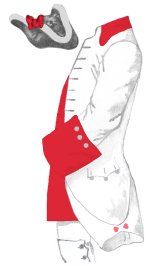 The coronela (colonel flag) of the regiment was white with a red Burgundian cross terminated in each corner by a medallion carrying the arms of the regiment (a crowned light red lion rampant on a silver field) surmounted by a golden crown. In the middle: the arms of Charles III surrounded by the necklace of the order of the Toison de Oro (Golden Fleece).

The batallonas (ordonnance flags) of the regiment were white with a red Burgundian cross terminated in each corner by a medallion carrying the arms of the regiment (a crowned light red lion rampant on a silver field) surmounted by a golden crown.