A tercio of 12 companies was raised in 1580 by don Gabriel Niño de Zuñiga in the heart of Castile. In July of the same year, it took part to the invasion of Portugal and then became the Tercio departamental de Portugal. Soon it was increased by 5 additional companies and now counted some 1,940 men.

In 1587, a large part of the tercio was sent to the Netherlands. In 1588, it took part to the ill fate expedition of the Armada against England and returned to the Netherlands after suffering heavy losses. By 1593, it had been renamed Tercio de Lisboa.

In 1625, when the English tried to detach Portugal from Spain, 2 companies of the tercio were sent out to Ceuta. In 1626, the tercio defended Lisboa to prevent an attack by a Dutch fleet of 95 sails.

In 1640, when the Portuguese rebelled against the Spanish occupation, the tercio defended the castle of San Juan but finally had to capitulate in face of superior forces. The tercio was then transferred to Catalonia to fight the French. It seized the pass of Balaguer on December 9 and took part to the capture of Montroig and Cambrils; and to the recapture of Tarragona. Along with the Spanish army, it then marched on Barcelona. In 1641, the tercio fought at the lost battle of Monjuich (January 16) and retired on Tarragona which was soon besieged by a French army. Even though plague broke out in the city, the tercio resisted during 4 months until a Spanish relief fleet arrived in the harbour on August 20, forcing the French to lift the siege and to retire to Villafranca. The tercio had suffered terrible losses during this siege, being reduced to only 800 men. Nevertheless, it joined the Spanish army under the command of the marquis de la Hinojosa and took part to the recapture of Palou (November 12). In 1642, as part of Hinojosa's force, it triumphed at Vendrell (January 5) and Crexell (January 8). It also distinguished itself at the capture of the hermitage of Vilallonga and of the castle of Vallmoll before returning to Tarragona. In 1643, the French failed to seize Rosas relieved just in time by the tercio of Lisboa. In 1645, renewed their attempt against Rosas which finally surrendered on April 30. The tercio left the place with the honours of war. In 1646, the tercio took part to the victorious offensive against the French army under the command of Harcourt at Lerida. In 1647, the tercio served in the army of don Francisco Melo. In 1648, the Spanish army now under the command of don Juan Garcia adcanced on Barcelona. However, the offensive was abandoned and the tercio garrisoned Tarragona. In 1650, the tercio took part to the capture of Juniera (August 28), Flix (September 5) and the castle of Miravet (October 8). During the night of November 9, the tercio suffered heavy losses in a failed attempt to storm Tortosa which finally surrendered on November 27. On December 15, the tercio garrisoned the conquered town. In 1651 and 1652, it took part to the siege of Barcelona and successfully stormed San Feliu de Quixols on June 17 1652 before returning to the entrenchments around Barcelona (June 20) who fell on September 4. The tercio then took part to the siege and capture of Mataro (end of September). In 1653, it was part of the Spanish force which relieved and defended Girona until the French were forced to lift the siege. In 1654, the tercio was aboard the Spanish squadron blockading Rosas when the Spanish army was routed, forcing the squadron to retire. In 1655, the tercio rejoined the army and distinguished itself at the recapture of Berga on September 20. In 1656, it served aboard the Spanish fleet and stormed Esponolla.

In 1662, the tercio was sent back to Portugal where, in May and June, it took part to the capture of Borba, Jurumena, Malpica, Beira and Monforte. On June 28, it stormed Ocrato. It then joined back the Spanish army and took part to the storming of Onghela on July 7. After the campaign, the tercio retired to Badajoz and later to Cadiz. In May 1663, it returned to Portugla where it took part to the siege of Evora and to the lost battle of Estremoz (June 7) where it suffered very heavy losses. It then retired to Cadiz once more. In 1666, the tercio embarked aboard a Spanish fleet and landed in front of Lisboa. On June 28, it launched an attack on the castle of San Juan which quickly surrendered.

In 1698, the tercio garrisoned Novara.

At the beginning of the War of the Spanish Succession, in 1701, the tercio joined the Franco-Spanish army who occupied the lines of the Adige near Cassano. As part of this army, it took part to the battle of Chiari (September 1) and later garrisoned Finale. In 1702, the tercio successively occupied Cremona, Cassal-Maggiore and Viadama before joining the army of Lombardia on the Po. At the beginning of 1703, the tercio left Finale to take position on the lines of the Mirandola. In 1704, it participated in joint operations with French units in Piedmont and unsuccessfully defended Ibrea which fell on April 5. In 1706, the tercio was transferred to the lines on the Adda to defend a boat-bridge. It assisted to the action of Castiglione and garrisoned the castle of Milan. In 1707, the Austrians laid siege to Milan defended by the tercio. On March 20, the Spanish capitulated and retired to Novara. The tercio was then sent back to Spain. In 1708, the tercio joined the French division who initially operated in Catalonia before marching towards the province of Valencia where it captured Alcoy (January 9). The tercio then sailed to Porto-Longone on the island of Elba. From 1709 to 1713, the tercio did not take part to nay major action. Garrisoning Ajaccio in 1710 and Porto-Longone in 1711. In 1713, the regiment left Porto-Longone and sailed to Alicante where it disembarked before marching towards Barcelona to take part to the siege of this city. In 1714, after the capture of Barcelona, it garrisoned the town. On May 20 1715, the tercio became the Regimiento de Lisboa.

In 1717, the regiment was cantoned in the districts of Aragon and Valencia. In 1718, it was supposed to take part to the naval expedition aiming at the restoration of the Stuarts on the throne of Great Britain.

In 1723, the regiment was sent to Ceuta to protect the town against Moroccan attacks. It remained in Ceuta till the end of 1725 when it was transferred to Cadiz. However, in December 1726, it was sent back to relieve Ceuta. In 1729, it finally returned to Andalusia. In 1731, Ceuta being threatened once more, the regiment returned to Africa. On October 7, it took part to a battle near Ceuta.

During the War of the Polish Succession, in 1734, the regiment was recalled to take part to the siege of Gibraltar. In 1735, its 2 companies of grenadiers were sent to Cadiz where they formed the kernel of the regiment Reina who was being raised in Guadalajara. In 1737, Lisboa Infantry joined the army assembling in Estremadura and occupied Miajadas, Torremocha and Salvatierra.

In October 1739, 200 men of the 2nd battalion were sent to America to protect the Spanish colonies against British endeavours. In April 1740, this small detachment took part to the victorious defence of Cartagena de Indias. On July 20, they were followed by the rest of the 2nd battalion who sailed for Cartagena. On October 15, the 1st battalion embarked aboard a Spanish fleet which operated against Gibraltar.

During the War of the Austrian Succession, the regiment was transferred from Cartagena de Indias to San Augustin in Florida in 1742 to take part to the planned expedition against the British establishments. During the difficult landing of the Spanish troops on the beaches of St. Simon Island in Georgia under the fire of the British guns of Fort St. Simon, the regiment advanced imperturbably up to the foot of the fortifications. Oglethorpe's troops evacuated the fort and took new positions in Carolina. The Spanish force used the fort as their headquarters until July 13. The conflict persisted for a few months till June 5 1743 when the Spaniards were defeated and retired to Florida. The regiment then returned to Spain. On February 22 1744, the regiment embarked on board general Navarro's squadron and took part to the naval battle of Cap Sicié near Toulon against a British fleet. During the battle, the regiment lost captain don Benito Dominguez and several troopers.

From 1755, the regiment took part to various naval or land expeditions. Its grenadiers took part to a raid against smugglers in the border town of Ceclavin.

During the Seven Years' War, the regiment ranked 16th and was under the command of:

In 1791, the regiment was renamed Zaragoza.

The regiment did not take part to the invasion of Portugal in 1762. 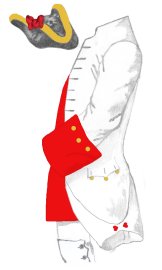 Even though the distinctive colour of the regiment is described as encarnado, Taccoli's illustration show a type of garance red which we have retained for our uniform plate.

The coronela (colonel flag) of the regiment was white with a red Burgundian cross terminated in each corner by a medallion carrying the arms of the regiment (silver field with a lateen vessel sailing on the Tagus) surmounted by a golden crown. In the middle: the arms of Charles III surrounded by the necklace of the order of the Toison de Oro (Golden Fleece).

The batallonas (ordonnance flags) of the regiment were white with a red Burgundian cross terminated in each corner by a medallion carrying the arms of the regiment (silver field with a lateen vessel sailing on the Tagus) surmounted by a golden crown.