The regiment was initially raised in 1536 in south-western Finland. In 1632 the Åbo ohh Björneborgs ryttare was established. Indelta in 1690.

In the Great Northern War shipped to Livland in 1700 with the Wellingk's Corp, then with the Schlippenbach's Army. Heavy losses at Erastfer and Hummelhof, 1703. From 1704 in the Lewenhaupt Army and with him to Ukraine. Captured after Poltava. Raised again with the "fördubblingen" as the basis. Thereafter with the Army of Finland. With Armfeldt in the 1718 campaign against Trondhjem.

The regiment counted 8 companies for a total of 1,000 men.

At the beginning of the Seven Years' War, the regiment was stationed in the Finnish provinces of Åbo and Björneborg. 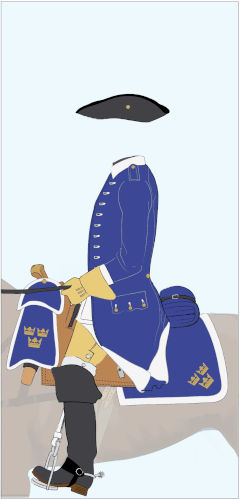 The drums were made of brass with white rims.