In 1534 , the Spanish troops operating in Lombardy were designated as a tercio even though their organisation differed from the one of regular tercios. The troops of this new tercio saw their pay significantly increased. The Spanish commander seeing no reason to have another tercio of Spanish infantry in Italy, amalgamated all independent companies coming from Spain or elsewhere to this actual unit. It seems that this tercio was the first one to introduce and pay a bodyguard of German halberdiers.

In 1537, these troops were finally organised as the old tercios and was designated as the Tercio ordinario del Estado de Milan.

In 1560, the tercio was renamed Lombardía.

During the War of the Polish Succession, the regiment sailed for Italy from Barcelona on October 17 1731. It disembarked at Livorno and took part in the capture of Lunegiana, Mozza and Venza. In 1734, it was part of the Spanish army who captured Naples (April 12) and won the battle of Bitonto (May 24). On August 23 1734, the regiment embarked for Sicilia where it served until October of the same year when it returned to Italy. It served in Italy until the end of the war in 1736 and then returned to Barcelona in Spain.

During the War of the Austrian Succession, the regiment served in Italy against the Austrians from 1741 to 1748. In 1741, it siled for Toscana. On February 7 1743, it fought at the battle of Camposanto. In 1745, it took part to the capture of Tortona (May 14), Piacenza (September 12) and Alessandria (October 12). On June 16 1746, it fought at the battle of Piacenza. After the battle, as part of the Ceballos division, it followed the general retreat of the Franco-Spanish army towards Nice. When the combined army crossed the French border, the regiment led by general Cermeño dislodged the enemies from the heights of Monteroso. It finally embarked at Antibes (???) and sailed to the kingdom Naples which was threatened by the victorious Austrian army. Upon its arrival, the regiment installed itself in the capital where it remained for some time, hostilities being suspended during the diplomatic negotiations.

In 1749, after the peace, the regiment returned to Spain where it disembarked at Barcelona. It then went to Zaragoza.

In 1752, the regiment was sent to garrison Oran where it served for 40 forty months. It distinguished itseld in a few sorties against the Moroccan Moors.

During the Seven Years' War, the regiment ranked 3rd and was under the command of:

In 1776, the regiment changed its name to Principe.

In 1756, the regiment returned to Spain from Oran and was cantoned at Cádiz.

In 1762, when war broke out with Portugal, the regiment was ordered to take an active part to the operations. As a prelude to the future campaign, several detachments of the regiment occupied the Portuguese towns of Bragança and Chaves, abandoned by the Portuguese army. The regiment formed part of the 4th brigade of the second line of the Spanish army. The regiment was then incorporated into the 2nd brigade. As part of this brigade, the regiment contributed to the siege and capture (July 25) of Almeida where its behaviour was worthy of its ancient reputation. To complete this enterprise, colonel don Francisco Madariaga entered into Figueira de Castelo Rodrigo at the head of the first battalion while lieutenant-colonel marqués de la Torre with the second battalion dislodged the enemy from the mountain of Santo. After these operations, the regiment was incorporated into the Rivagüero division which continued its progressive advance and took possession of Serra-Fermosa and of the important line of the Talladas which linked the right wing walls of Castello Branco. The division then advanced up to Herrera. At the end of the campaign, it had reached Valencia de Alcantara.

After the peace, the regiment was cantoned at Vic in Catalonia. 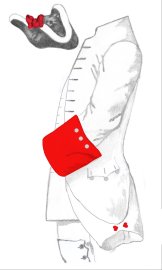 N.B.: the conde de Clonard gives violet as the distinctive colour of the regiment until 1766

The coronela (colonel flag) of the regiment was white with a red Burgundian cross terminated in each corner by a medallion carrying the arms of Lombardy (opposing cantons showing a black imperial eagle on a gold field and a blue snake swallowing a man on a white field) surmounted by a golden crown. In the middle: the arms of Charles III surrounded by the necklace of the order of the Toison de Oro (Golden Fleece).

As per an État militaire, towards 1750 the batallonas (ordonnance flags) of the regiment were white with a red Burgundian cross terminated in each corner by a medallion carrying the arms of Lombardy (opposing cantons showing a black imperial eagle on a gold field and a blue snake swallowing a man on a white field) surmounted by a golden crown.

N.B.: we have not found contemporary evidence concerning the arms of Lombardy. In our reconstruction, we use the arms of Lombardy under Spanish rules. Another alternative would be to use the documented arms worn on the flags of the regiment in 1776 when it was renamed Principe: a red cross of Burgundy on a silver field with red lions rampant in each quarter.