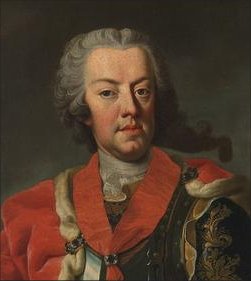 Prince Charles of Lorraine, detail of a portrait by Martin van Meytens, in 1743 - Source: German Wikipedia

In 1716, at the age of four, Charles succeeded his uncle, Charles Joseph of Lorraine Prince of Trèves, as owner of an infantry regiment.

On 5 April 1729, Charles was admitted in the Order of the Golden Fleece. He resided for the first time in Castle La Favorite built by his father in Lunéville.

In 1736, when his brother married Maria Theresia, Charles followed him to Vienna. Charles was soon appointed colonel in the Austrian Army and, on April 10 1736, became owner of the infantry regiment Jung Lothringen who would later carry his name.

On August 6 1737, Charles was promoted to General Feldwachtmeister (GFWM). Along with his brother Franz Stephan, he took part in the War against the Turks.

On January 20 1738, Charles was promoted to Feldmarshall Lieutenant (FML). During the next campaign against the Turks, he took part in the Combat of Kornia where he commanded the rearguard, and in the combat of Mehadia. In these combats he demonstrated courage and fearlessness.

On July 22 1739, in the Battle of Grocka, Charles commanded the left wing and was severely wounded.

On November 22 1740, on the eve of the War of the Austrian Succession, Maria Theresia promoted Charles, her brother-in-law, to Feldmarshall (FM). The same year, Charles bought the Castle of Möllersdorf near Traiskirchen which he enlarged and adorned with a beautiful Orangery and a French garden.

In 1741, Charles, as the successor of Archduchess Marie-Elizabeth, became Governor-General of the Netherlands, a function that, due to the current conflict, he was not able to assume before 1744. In November 1741, Charles joined his brother Franz Stephan's army in Bavaria.

At the beginning of 1742, considering the moderate success of Franz Stephan in the previous campaign, Charles was entrusted with the command of the army. Charles had gained some experience in previous campaigns, was brave and prudent. Maria Theresia and the court considered him as more appropriate commander than his brother Franz Stephan. As long as Charles surrounded himself with able advisers (Traun, Khevenhüller, Browne, Daun), he looked like a quite able commander. Charles assembled his army in Southern Bohemia. He planned to confront the Prussians in Moravia but Browne tried to dissuade him to do so. Charles hesitated and postpone departure for three weeks, worsening his grand-tactical situation. Only a direct instruction from Maria Theresa persuaded him to give the order to march. On May 17, Charles faced Frederick the Great for the first time at the Battle of Chotusitz, losing 19,000 casualties and 18 guns. After this defeat, Charles marched with the remnants of his army against the French campaigning in Southern Bohemia (as recommended by Browne a few months earlier).

In the campaign of 1743, Charles experienced reasonable successes in Bavaria. However, it seems doubtful that these successes could be directly attributed to his personal commitment. For example, in the combat of Deggendorf where Browne led Austrian troops to victory, Charles, who had taken a long nap, appeared on the battlefield after the engagement was over. Nevertheless, such successes of his army heightened his reputation. In July in Hanau, Charles met with King George II of Great Britain who, at the head of the "Pragmatic Army" had just defeated the French at Dettingen. Karl declined to serve under George II and negotiations were interrupted. Both armies continued to operate independently. However, Charles did not get new successes. He then concluded a treaty with Bavaria at Nieder-Schönfeld without consulting Maria Theresia and the Court. The terms of this treaty were unfavourable to the House of Habsburg and Charles received reproaches for his decision.

On January 7 1744, Charles married Maria Anne Amelie of Austria, sister of Maria Theresia, who made them jointly governors-general of the Austrian Netherlands. Very soon the war broke out afresh, and Charles, at the head of the Austrian Army on the Rhine, won great renown by his brilliant crossing of the Rhine. At this moment Frederick started the 2nd Silesian war, all available troops were called back to oppose him, and the French maintained their hold on Lorraine. Charles hurried to Bohemia, whence, aided by the advice of the veteran Feldmarshall Traun, he quickly expelled the Prussians. At the close of his victorious campaign he received the news that his wife had died in childbirth on December 16 at Brussels.

Charles was once more entrusted with the command of the Austrian Army for the campaign of 1745. He took the field in Silesia, but this time without the advice of Traun, and he was twice severely defeated by Frederick, first on June 4 at Hohenfriedberg where he lost 13,730 casualties to the Prussian's 4,800; and then, on September 30, at Soor (present-day Zdar/CZ). The War council then suggested an investigation in Charles' capacities as military leader but this suggestion came to nothing.

In 1746, Charles was appointed commander-in-chief in the Low Countries. He was then at the head of an army of British, Hanoverian, Dutch and Austrian troops totalling 97,000 men, against 120,000 Frenchmen. During the campaign, he mostly let the initiative to the French. On October 11, he met them at Rocoux, near Liège. He did not expect them to attack and was having lunch far from the front line when he was informed that the battle had been engaged. The French assault concentrated on the Dutch contingent, on the left of the Allied line and overpowered them, while the Austrians (on the right of the line) did nothing to help them. The French did not press the pursuit, but took Liège as a result of their victory. This led to the Austrians losing control of their sector of the Netherlands.

During the peace of 1749-1756, Charles' government of the Austrian Netherlands was marked by many reforms and the prince won the regard of the people by his ceaseless activity on their behalf.

After the first reverses of the Seven Years' War, Maria Theresia called Charles again to the supreme command in the field for the campaign of 1757. Charles took time to join his army in Bohemia and, by the time he arrived on April 30, the Prussians had already started the invasion of Bohemia. Meanwile FM Browne had concentrated the Austrian army in good positions. However, Charles wanted to cede Prague without combat and the direct intervention of the Court forced him to confront the Prussians. On May 6, Frederick won the great victory of Prague. At the most critical time of the battle, Charles fainted and had to be brought back within the walls of Prague. At about the same time, Browne was mortally wounded. After his defeat, Charles was shut up with his army in that city. Before dying, Browne advised him to try to break through Prussian lines (after all Chrales still had some 45,000 men in Prague) but Charles rejected this suggestion. On June 18, Charles had no part in the victory of the relieving army under Daun in the Battle of Kolin. However, this victory forced the Prussians to raise the Siege of Prague and to undertake a long retreat towards Silesia. For the coming operations, Charles' brother, the Emperor Franz Stephan, advised him to consult with FM Daun before any decision and to not initiate stand-alone actions.

In the second hald of 1757, the Emperor and State Chancellor Kaunitz pushed for an Austrian offensive in Silesia. The commanders of the corps of Charles' Army offered him several successes: on November 12, Count Nádasdy received the capitulation of Schweidnitz; on November 22, Daun and Lacy vanquished Bevern's Corps in the Battle of Breslau; and on November 23, Breslau capitulated. Great enthusiasm was displayed in Austria over these repeated successes which seemed to be the final blows to Frederick. However on November 5, a few weeks before, the King of Prussia had routed the French at Rossbach and had been swiftly returning to Silesia. On December 2, Charles held a council of war where Daun was of the opinion of entrenching behind the Weistritz River while others, like Charles and Lucchesi, preferred to pass the river and to offer battle. The latter opinion prevailed and, on December 5, Frederick inflicted on Charles the complete and crushing defeat of Leuthen. A mere remnant of the Austrian army reassembled after the pursuit, and Charles was relieved of his command.

In Vienna, an overall critique of the conduct of the campaign aroused. Surprisingly, the debacle was initially attributed to Count Nádasdy, even though he was probably the least to blame. Accordingly, he resigned his command and went to his estates. The Court, the army and the Allies demanded the dismissal of Charles of Lorraine from the supreme command. Pamphlets circulated in Vienna against him. However, Charles did not feel guilty of any wrongdoing. Finally, the emperor sent him a letter, asking him to resign his command and offering him to become his chief adviser in Vienna. However, it took a personal letter of Maria Theresa, at the end of January 1758, to convince Charles to resign. He was replaced by Leopold Joseph Count Daun as commander-in-chief.

To commemorate the victorious Battle of Kolin, Maria Theresa had founded the a military order named after her. Family politic of the House of Habsburg ensured that, on March 7 1758, the discredited Charles of Lorraine was among the first promotion to this order. Accordingly, he received from the hands of the empress the Grand Cross of the Maria Theresa Order. The Chancellor of the Order, State Chancellor Kaunitz, received the delicate task to prepare a speech outlining Charles' “successes”. His speech was described as a masterpiece of diplomacy. Without a word about the lost Battle of Prague, Kaunitz insisted on Charles' first ever victory at Breslau (even though this success was more attributable to Daun and Lacy).

For a year thereafter Prince Charles acted as a military adviser at Vienna, he then retired from military service and returned to Brussels, where, during the remainder of his life, he continued to govern the Austrian Netherlands.

In 1761, Charles became Great Master of the Teutonic Order, assuming by the same token the command of the regiment Deutschmeister Infantry.

From 1766 to 1780, Charles was also Master of the lodge of the "Priory of Sion". He lived mainly in his Castle of Tervuren where he held a brilliant court. He acted as patron and protector of arts and sciences and won the affection of his subjects.

Charles of Lorraine died on 4 July 1780 at the Castle of Tervuren, and was buried in the Church of St. Michael and St. Gudule in Bruxelles on July 10. His heart, however, was kept in the chapel of the Cordeliers with his Lorraine ancestors at Nancy.