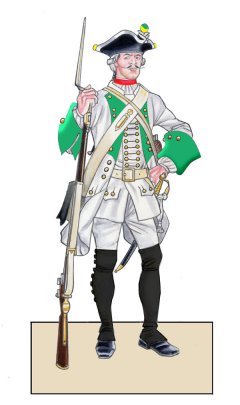 The regiment was originally a Spanish Habsburg unit raised at Zaragoza in 1705, during the War of the Spanish Succession, and placed under the command of Colonel Pertús. After his death, the regiment "Ciudad de Zaragoza" (Town of Zaragoza) was placed under the command of Don Antonio Ãlvarez de Toledo, Count of Alcaudete, son of the Count of Orpesa [sic] (Oropesa?). In Austrian sources his name has become Anton Didacus. By 1713, the regiment was operating in Lombardy.

In 1721, troops from 3 other Spanish regiments (Ahumada, Faber and Marulli) were incorporated into the regiment who became part of the Austrian army. The Count Alcaudete died at Prague in September 1734 and was succeeded by Juan Jacinto Vazquez y Vargas (aka Jacob Count Vasquez de Binas) at the head of the regiment.

From 1737 to 1739, the regiment fought against the Turks in Bosnia, Serbia, Banal and Transylvania.

In 1740, the regiment was stationed in Lombardy.

On December 23 1755, Count Vasquez de Binas died and was succeeded by Juan Manuel Luzán (aka Emanuel Count de Luzzara). The regiment incorporated recruits from the Duchy of Mantua.

Regimental numbers were introduced only in 1769 when this regiment was designated as "I.R. 48". In 1769, the regiment was known as Caprara. It was disbanded in 1796.

In October and November 1757, the regiment participated in the siege and capture of Schweidnitz where it lost its commander Colonel Guido di Bagno. On November 22, one battalion of the regiment took part to the battle of Breslau where it was deployed in the first line of the infantry centre of Nádasdy's Corps. On December 5 at the battle of Leuthen, one battalion of the regiment was deployed in the second line of the Reserve of the left wing under Marshal Forgách as part of Nádasdy's Corps.

By August 2 1758, the regiment was part of the reserve of the main Austrian army under the command of Count Leopold Daun near Jarmeritz. Daun was following up the Prussian army retiring through Bohemia after the failure of the Prussian invasion of Moravia.

Until 1760, despite the new regulation of 1755, the musicians wore coats of reversed colours with white swallow nests and white turnbacks. From 1760, they wore uniforms identical to those of the privates with the following differences:

All German infantry regiments carried identical colours: a white Leibfahne (colonel) and yellow Regimentsfahne. The hand painted colours were made of silk and, according to some sources, measured 178 cm x 127 cm. However, a flag kept at the Heeresgeschichtliches Museum in Vienna shows different proportions (unfortunately we do not know the exact measurements) which we have used for our illustrations. The 260 cm long flagpoles had golden finial and were decorated with black and yellow spirals of cloth.

User:Zahn and Luc Antonelli for gathering most of the information about this regiment

Juan for additional information on the origins of the regiment