The regiment was raised on November 13, 1616 by Nicolas de Neufville, Marquis de Villeroy. It pretended to trace its origins in the old Bandes de Piémont. Initially it was a gentleman's regiment who belonged to the House of Villeroy, governing the Province of Lyonnais.

In 1617, the new regiment took part in the capture of Félissan, Non and La Roque. In 1618, it was reduced to its Mestre de camp company which remained in Lyon.

On July 7, 1621, during the Huguenot rebellions (1620–1628), the regiment was re-established and went to the siege of Montauban. In 1622, it took part in the sieges of Sainte-Foy and Briteste, near Albi. At the end of the campaign, the regiment was once more reduced to a single company which remained in Sainte-Foy. On August 13, 1624, it was re-established. In 1625, it campaigned in Piedmont where it took part in the siege of Gavi, in the capture of Cairo, in the defence and combat of Verrua and in the retreat towards Acqui. It was disbanded once more on May 26, 1626.

During the War of the Polish Succession (1733–35), the regiment served on the Rhine.

In 1761, the regiment took part in the defence of Belle-Isle against a British amphibious force. After the surrender of the island, it was transferred to Germany. By June 1, it had joined the Army of the Lower Rhine. On July 16, it was present at the Battle of Vellinghausen where it formed part of the first line of Soubise's infantry. By July 25, it was attached to de Muy's corps. 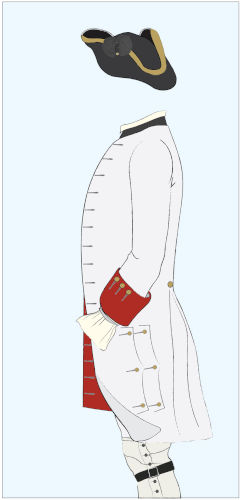