This gentleman regiment was raised in Lorraine in 1589 by the Comte de Vaubecourt and joined the army of Henry IV in France. On May 6, 1598, this regiment was disbanded and its companies returned to Lorraine. The same year, they followed the Comte de Vaubecourt to Hungary where they distinguished themselves against the Turks at the capture of Raab. In 1606, Vaubecourt and his regiment entered once more in the French service and assumed garrison duty in Sédan. On April 24, 1610, when France was arming against the House of Austria, the regiment was finally admitted into the ranks of the French Royal Army. The same year, to the exception of its colonel company, it was disbanded.

On August 31, 1616, the regiment was re-raised and, from that date, has always been part of the Royal Army. By 1619, it was quartered in Verdun and ceded 400 men to replenish the ranks of Picardie Infanterie. In 1622, then counting only 200 men, the regiment defended Mouzon.

In 1632, the regiment occupied the mountains above Privas, which had become the heart of the rebellion. One of its detachment captured the Comte de Lestranges, one of the main leaders of the rebels. The regiment was present at the Battle of Castelnaudary. In 1633, the regiment, who had taken its winter-quarters in Bresse, took part in the conquest of Lorraine and was at the capture of Haguenau, Saverne, Lunéville and Nancy. In 1634, it took part in the sieges of Bitche and La Mothe, and in the reliefs of Philisbourg and Heidelberg.

When the army was reorganised in 1762, the regiment took the name of the Province of Guyenne. However, the Chevalier de Chatellux retained his command until 1771.

In 1757, the regiment left Cambrai to join the army of Maréchal d'Estrées (Army of the Lower Rhine). At the end of June, it was at the camp of Bielefeld with d'Estrées' main corps. On July 26, the regiment was at the Battle of Hastenbeck, where it was part of the center under Contades. It lost more than 150 men during this battle. After the victory, it encamped at Grosselsen near Hameln with the main body of the Army of the Lower Rhine from July 31 to August 2. In October, the regiment was transferred to the Army of Saxony. On November 5, under the Comte de Lorges, it took part to the Battle of Rossbach, where it was placed in the second line of the centre. Once more, it suffered heavy losses during this battle. After this defeat, it retreated on Hanover. At the end of the year, it took up its winter quarters at Paderborn, Bielefeld and Rehda; in the fourth line of the French Army.

In January 1758, the regiment retreated again, first on Hildesheim, then on Wesel in March. From Wesel, it returned to France where it was assigned to the protection of the coasts of Bretagne and cantonned in Brest. On June 5, during the first British expedition against the French Coasts, a detachment of the regiment formed part of the French force defending Cancale, near Saint-Malo, it retired when a superior British force landed under the protection of the fleet.

In 1759, the regiment contributed 200 men to serve with the the fleet.

In 1760, the regiment remained stationed on the Coasts of France. It took up its winter-quarters in Saint-Omer.

By June 1, 1761, the four battalions of the regiment had joined Army of the Lower-Rhine under the command of the Prince de Soubise at Wesel. On July 16, the regiment was present at the Battle of Vellinghausen, where it was deployed on the left of the second line of the infantry centre. On August 9, it was part of the reinforcements of 10,000 men sent by Soubise to the Army of the Upper-Rhine for its enterprise against Hameln. This contingent was placed under the command of Lieutenant-General de Lévis. In September, the regiment occupied the Sabbaburg forest to cover the right flank of the army. It was vigorously attacked in this forest but managed to retire without major losses. In November 1761, it was renamed Chatellux.

For the campaign of 1762, the regiment was once more allocated to the Army of the Lower Rhine under the Prince de Soubise. By July 12, the regiment was posted at the camp of Helsa under M. de Guerchy. On July 14, Guerchy sent the battalion of grenadiers and chasseurs of the present regiment to force the Allies to retire behind the Eder River. At 6:00 p.m., Guerchy finally retired towards Melsungen and reoccupied his old camp on the right bank of the Fulda. From December 19, the entire French army still operating in Germany abandoned its cantonments and marched to Butzbach, converging on Frankfurt. Germany had to be evacuated by December 31. The regiment was directed towards Landau. 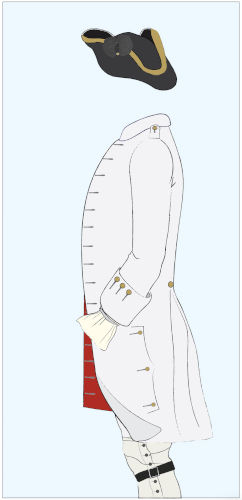