The regiment was raised in 1743 in Köpenik, Pomerania, for colonel Peter von Dieury, from two squadrons of Hussar Regiment Nr 5 and new recruits (some of them prisoners of war). By 1744 it counted 10 squadrons.

The regiment was often referred to as die Gelben (the Yellows). They were also nicknamed Kanarienvögel (canaries) because of their yellow uniforms.

During the War of the Austrian Succession, from September 10 to 16 1744, the regiment covered the siege of Prague. On December 1 5 1745, it distinguished itself at the battle of Kesselsdorf.

The numbering system (Stammliste) was first used by Leopold I., Fürst von Anhalt-Dessau (Der alte Dessauer) in the Dessauer Spezifikation from 1737. Around 1780 the numbers were used in the printed Stammlisten. It became official by "Cabinets-Ordre" from October 1, 1806. The present hussar regiment was attributed number 7.

By 1806, the regiment was known as the von Koehler Hussars. That same year, on October 14, it took part in the battle of Jena in Rüchel's corps; then with Blücher's corps. Four squadrons of the 2nd battalion surrendered at Krempelsdorf on November 7; one squadron surrendered at Boitzenburg on November 12; one squadron at Lüneburg on November 11. The regiment was not re-raised. The depot and some remnants crossed the Vistula and were used to form the new 3rd Hussar Brigade.`-

In 1757, the regiment was part of Lehwaldt's army assigned to the defence of East Prussia against a Russian invasion. On August 30, at the beginning of the battle of Gross-Jägersdorf, the regiment guarded one of the three outlets leading to the Russian camp. When the Prussian army deployed, it was sent ahead to reconnoitre the wood. It was afterwards redeployed at the extreme left of the first line of cavalry under lieutenant-general Schorlemmer. It then charged the Russian, penetrated deeply into its lines.

Squadrons operating on the Eastern Theatre

At the beginning of 1758, the 8 squadrons who had not been detached to western Germany initially served against the Swedes. In July they were sent to reinforce the small Prussian army trying to stop the Russian invasion of Brandenburg. On July 20, they arrived from Pomerania and made a junction with Dohna's corps. Dohna immediately sent these squadrons to Frankfurt an der Oder to strengthen the garrison. On August 23, they were in Frederick's vanguard when he crossed the Oder. On August 25 at daybreak, they were part of the hussar squadrons who covered the encircling movement of the Prussian army before the battle of Zorndorf. They then joined the fourth Prussian column. During the battle, led by Seydlitz, they counter-charged and overwhelmed the Russian cavalry. They then reformed and charged the flank and rear of the Russian infantry slaughtering them. On September 2, after this bloody battle, they formed part of a strong detachment under Manteuffel which followed up the Russian army retiring towards Landsberg. On September 18, Dohna sent Manteuffel at the head the regiment and of 3 bns to dislodge the Russian Buccow's corps from Soldin. On September 19, Manteuffel abandoned his project but left the regiment and 2 bns at Neudam on his way back.

In 1759, 7 squadrons of the regiment served in Brandenburg under the command of Dohna. On July 23 1759, these 7 squadrons took part in the battle of Paltzig where they were attached to the rearguard under the command of major-general von Wobersow. A few weeks later, on August 12 during the battle of Kunersdorf, these 7 sqns formed part of Malachowski brigade detached to the left bank of the river Oder near Lebus.

In 1761, 8 squadrons served on the Prussian theatre of operation. At beginning of the year, each of these squadrons comprised 11 NCOs and 150 troopers in a single squadron. In September, they took part in the second Prussian raid in Greater Poland under Platen. On September 14, 200 of their troopers, under colonel Kleist, took part in the destruction of the Russian supply magazine in Kobylin. On September 15, these squadrons did not fight in engagement of Gostyn. At the end of September, they were part of the Prussian reinforcements sent to contain the Russian operations in Pomerania. On October 2, they arrived at Colberg and encamped at Pretmin, detaching parties at Colberger Deep (today Dzwirzyno) and Alt Bork. On October 17, 5 squadrons of the regiment took part in Platen's expedition to gather supply. On October 22, after the combat of Gollnow, these 5 squadrons had been rediced to a total of only 200 horses. From the 3 remaining squadrons, 1 garrisoned Treptow and 2 were in the camp near Colberg. On October 25, the squadron at Treptow (about 100 men) was captured. On November 14, when the the prince of Württemberg escaped from the blockade of the fortress of Colberg, 200 men of the regiment under major Lutz were part of his advanced guard. After the junction of Platen's and Schenckendorf's corps, these squadrons served in colonel Lossau's brigade till the end of the campaign. On December 12, after the combat of Spie, these squadrons fought against cossacks at Drenow to cover the retreat of the Prussian army. At the end of the campaigns, these squadrons took their winter quarters in Lusatia.

Squadrons operating on the Western Theatre

In January 1758, 2 sqns of the regiment were part of Lehwaldt's army who proceeded to the invasion of Swedish Pomerania, bottling up the Swedes in Stralsund. On January 10, they were part of Holstein's corps who advanced into Mecklenburg, levied considerable contributions and took possession of Wismar (January 27) and Rostock (February 6). About mid February, Holstein's corps advanced into the duchy of Lüneburg and made a junction with the Allied army of Ferdinand of Brunswick. On February 23 near Stöckendrebber, the 2 squadrons of the regiment ambushed Polleresky Hussards, capturing 4 standards and their kettle-drums. On March 3, they fought in a skirmish near Lauenau. On March 26, they were at the clash of Lippstadt and on March 28, at a skirmish near Soest. On May 26 1758, these two squadrons were part of the corps of the prince von Holstein encamped at Dülmen. On May 31, this corps accompanied Ferdinand of Brunswick in his offensive on the west bank of the Rhine. On June 1, the 2 squadrons took part in a skirmish near Emmerich. On June 2 they were at a skirmish near Düsselward where they captured a standard belonging to Royal-Cravate Cavalerie; on June 12, at another skirmish near Clostercamp. On June 12, during the aborted attack on the French positions at Rheinberg, these two squadrons were in Holstein's (third) column of attack under major-general von Brandemer. On June 15, they took part in the clash at Tönisberg and also conducted a successful raid on Goch. On June 23, these squadrons took part to the battle of Krefeld where they were deployed on the right wing under the command of the Erbprinz (hereditary prince) of Brunswick. At 1:00 PM, these squadrons extended on the Allied right towards the village of Willich as if to turn the French left flank. They finally turned the French lines and chased them out of their entrenchments. On September 29, they fought in the skirmish near Koppenberg. From October 18 to 22, they took part in the blockade of Soest.

On March 19 1760, the 3 squadrons detached to the western front skirmished at Flieden. On May 29, 1 squadron was at the clash of Fulda (1 sqn). On July 16, the detachment took part in ambushes at Korbach-Emsdorff and Siebertzmühle. On July 31, they were at a skirmish near Warburg. On August 10, 2 squadrons took part in the capture of Sababurg. On September 6, the detachment was at the skirmish near Zierenberg. On June 16, it fought in the battle of Clostercamp and on October 18, at a October skirmish near Ginderich.

On February 15 1761, the 3 squadrons were present at the capture of Fritzlar. On March 21, they fought in the skirmish near Grünberg. On March 25, 2 squadrons took part in a skirmish near Dittershausen. On July 10, the detachment skirmished near Östinghausen and Untrop. On July 16, it was at the battle of Vellinghausen; on July 20, at the skirmish of Ruhne. On July 27 and 28, it skirmished near Soest and Gesicke. On August 18 , it was at the clash near Bredenborn; on September 19, at a skirmish at Hoof near Kassel; on September 21, at a skirmish near Fritzlar; and on November 5 at Einbecker Hube.

There seems to have been a transition between two uniforms during the Seven Years War. It is very likely that both uniforms were intermingled among the squadrons of the regiment.

Troopers were armed with a short, curved sabre, two pistols and a carbine. They rode black horses. 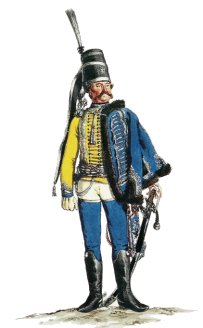 The officers wore uniforms similar to those of the troopers with the following differences:

The NCOs wore uniforms similar to those of the troopers with the following differences:

Trumpeters wore uniforms similar to those of the troopers with the following differences:

In 1743, king Frederick ordered the Hussars to return their standards. However, in 1758 during the Seven Years' War campaigns in Western Germany, detachments of Ruesch Hussars and Malachowski Hussars captured four standards of the French Polleresky Hussards at Stöcken-Drebber on February 23 1758 and one from Royal-Cravate Cavalerie at Düffelward on June 2 1758. For these actions, Frederick granted two of the Pollaresky Hussars standards to Malachowski Hussars.

Karpiński, Tomasz; Kampania 1761 r. na Pomorzu Zachodnim, manuscript of a book which will be published soon