On May 13 1682, the king of Spain authorised the creation of a tercio of 1,000 men in ten companies in the city of Jaen and appointed Don Pedro Fernandez Navarrete as Maestre de Campo of this new unit which was destined to the Navy. Consequently, the new unit was designated as the “Tercio Nuevo de la Armada del Mar Océano”. During the Autumn, the tercio marched to Andalusia. In 1683, it embarked aboard the fleet.

On July 19 1689, the tercio received orders to embark aboard the galleys of Cerdanya and sailed to join the Army of Catalonia. On July 27, these orders were changed and the unit was instructed to go to Cartagena and wait there for the arrival of its two companies previously detached to Ceuta. Finally, on September 10, new orders arrived specifying to transport the tercio from Cartagena to Oran and then to Larache to reinforce the garrison. However, the tercio was unable to force its way to Larache. In 1690, when the maritime campaign came to an end, it marched from Cádiz to its new quarters in Sevilla. In 1694, the tercio was sent from its quarters at Sevilla to the relief of Ceuta, besieged by a Moroccan army. In March 1695, it was transferred to Gibraltar but soon recalled to Ceuta which was threatened once more. In 1696 and 1697, it took part in the defence of Ceuta.

In 1700, the tercio was relieved at Ceuta and returned to Spain where it was quartered in the Province of Sevilla before being sent to Cádiz.

In 1715, the regiment subdued and pacified Catalonia and reconquered the Island of Majorca. It replenished the ranks of its two battalions with soldiers from disbanded regiments.

In 1718, the regiment was renamed again to become the “Regimiento de Infantería Mallorca”.

In 1728, the regiment was sent to Navarre and garrisoned Pamplona. In 1735, it assumed garrison duty in Barcelona.

After the war, in 1748, the regiment returned to Spain where it was posted at Barcelona.

In 1756, the regiment was part of the garrison of Gerona.

In 1757, the regiment was sent to form part of the garrison of Saragossa.

In 1759, the regiment went to Barcelona to receive the new sovereign of Spain, Charles III.

In 1761, the regiment returned to Saragossa but was soon sent to the Province of Guipúzcoa to garrison the place of San Sebastian. It later embarked at San Sebastian for Coruña. During the journey, two companies perished. They were replaced by companies from Granada Infantry. 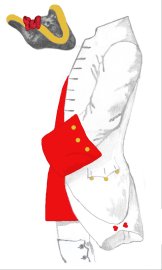 In 1746, for its conduct in an engagement on the Tidone River, the king authorised the regiment to carry the motto “Prius flammis combusta, cuam armis Mallorca victa”. However, in 1783, during the reign of Charles III, the colonel of the regiment, the Count de la Union, removed this motto from the colours of the regiment to diminish their cost.

The coronela (colonel flag) of the regiment was white with a red Burgundian cross terminated in each corner by a medallion carrying the arms of the regiment (d'or à quatre pals de gueules et à la bande d'azur) surmounted by a golden crown. In the middle: the arms of Charles III surrounded by the necklace of the order of the Toison de Oro (Golden Fleece).

The batallonas (ordonnance flags) of the regiment were white with a red Burgundian cross terminated in each corner by a medallion carrying the arms of the regiment (d'or à quatre pals de gueules et à la bande d'azur) surmounted by a golden crown.