The unit was raised as a single battalion on March 8 1693 under Colonel Adam Wilhelm von Sydow to serve in Hungary, from 1694 to 1697, against the Turks.

Soon after the beginning of the War of the Spanish Succession, in 1702, the unit was augmented to a full regiment. It was then placed in the Dutch service.

From 1713, the regiment was stationed in Pomerania. In 1714, it was officially incorporated into the Prussian Army.

From 1739, the regiment garrisoned Köslin and Rügenwalde. It levied its recruits in the Pomeranian districts of Schlawe and Stolp as well as in part of the Principality of Cammin and in the towns of Gollnow, Köslin, Rügenwalde and Stolp.

During the War of the Austrian Succession, the regiment was at the battles of Chotusitz (May 17 1742), Hohenfriedberg (June 4, 1745) and Soor (September 30, 1745), suffering heavy losses in the latter battle.

The numbering system (Stammliste) was first used by Leopold I., Fürst von Anhalt-Dessau (Der alte Dessauer) in the Dessauer Spezifikation from 1737. Around 1780 the numbers were used in the printed Stammlisten, still with some variations for the fusilier regiments. It became official by "Cabinets-Ordre" from October 1, 1806. The present infantry regiment was attributed number 17.

The regiment was disbanded in 1806 after its capitulation Halle and Magdeburg.

On August 26 1756, when the Prussian army proceeded to the invasion of Saxony, the regiment was part of the left column led by the Duke of Bevern. This column, who had concentrated in the area of Lübben, then advanced through Lusatia by Hoyerswerda and Bautzen, to Hohenstein (Sept. 8) then to Lohmen north of the Elbe near Pirna. On October 1, the regiment took part in the Battle of Lobositz where it was assigned to the brigade of the Lieutenant-General von Bevern. During this battle, the regiment suffered heavy losses. On October 23, when Keith's Army left Lobositz to return to Pirna, the regiment was part of the left column. On October 28, Keith's Army reached Gross-Sedlitz near Pirna and took its winter quarters soon afterwards.

In the Spring of 1758, the regiment took part in the invasion of Moravia. On August 4, during the retreat of the Prussian army after the failure of this invasion, the regiment escorted the train to Politz (present-day Police nad Metují). On October 14, it fought in the Battle of Hochkirch where it formed part of Retzow's Corps near Weissenberg.

On Saturday March 15 1760 at 5:00 a.m., the regiment along with a company of dragoons, left its winter-quarters and started his march towards Neisse under a very wet weather. Under the command of General Goltz, it escorted a considerable stock of baggage-wagons. The convoy was intercepted near Buchelsdorf by an Austrian force (5 cavalry rgts) led by Loudon. The regiment then formed a square around the baggage. This square resisted to three consecutive cavalry charges. The regiment then took the road again. Loudon tried again and again, probably six times, to attack the Prussian detachment between Siebenhufen and Steinau. Goltz lost only 18 wagons and some country carts. Near Steinau, Loudon gave it up as desperate and went his way after losing 300 men killed and 500 wounded while Manteuffel Infantry had lost 35 killed and above 100 left wounded or prisoners. On September 17, the regiment took part in the Combat of Hochgiersdorf where it was attached to the vanguard under Lieutenant-General von Forcade. On November 3, the regiment took part in the bloody Battle of Torgau where it distinguished itself, capturing 4 guns but suffering enormous losses (nearly 1,000 men killed or wounded).

On October 29 1762, at the end of the campaign of Saxony, the regiment took part in the Battle of Freiberg where it was deployed on the left wing under General Alt-Stutterheim who launched an attack on the right wing of the Austro-Imperial Army; the first battalion of the regiment participating in this attack while the second battalion protected the Prussian batteries.

The uniforms depicted in this section were introduced in 1741. 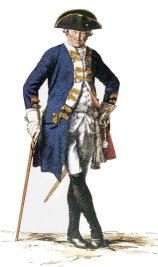 The narrow and wide drummer laces were identical and consisted of a white braid embroidered with a yellow, blue and black elaborate pattern.

The pikes used as staffs for the colours were brown (black after 1761).