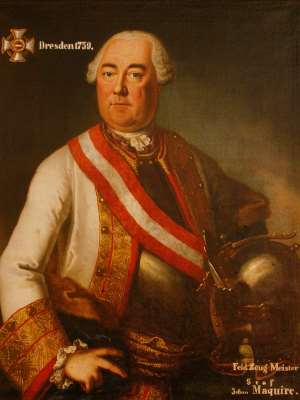 Maquire was born in Ireland, in a noble family who had taken part in the Irish Rebellion of 1641. His father was James McGuire and his mother Cecelia McNamara Reagh.

By 1729, Maquire was ensign in Temesvár.

In 1731, Maquire was captain in Regiment O’Neillan with whom he fought in the War of the Polish Succession aid in the Turkish War.

At the beginning of the War of the Austrian Succession, in 1742, Maquire was transferred to the frontier troops (Militärgrenze).

In 1746, Maquire was promoted colonel of the Warasdiner-Creutzer Grenzinfanterieregiment which was sent to Italy. He then captured a Spanish detachment at Pontremoli. On June 16, he distinguished himself at the head of his regiment in the Battle of Piacenza. In August 1746, Maquire and his regiment distinguished themselves at the storming of a strong redoubt defending the Bocchetta Pass between Genoa and Alessandria, while serving under the command of General Maximilian Ulysses von Browne. At the end of the year, Maquire was sent with 4,000 men to Draguignan to keep the enemy at bay. He remained in that region till January 24 1747.

In 1747, Maquire took part in the unsuccessful siege of Genoa. The same year, he was promoted major-general and Inhaber (owner) of the Grenzregiment No. 5.

After the War of the Austrian Succession, Maquire joined a commission responsible with the reorganisation of the Grenzer troops.

At the outbreak of the Seven Years' War, on August 28 1756, Maquire was promoted Feldmarshall Lieutenant (FML). The same year, he took part in the Battle of Lobositz.

In the Spring of 1757, during the Prussian invasion of Bohemia, Maquire took part in the battles of Reichenberg (April 21) and Prague (May 6). After the defeat of Prague, Maquire was charged to operate in the rear of the Prussian army. When, after their defeat at Kolin (June 18), the Prussians retreated towards Saxony, Maquire had to prevent them from reaching their depot at Zittau. During their retreat, the Prussians under Prince August Wilhelm of Prussia lost lots of material and a great number of soldiers deserted. In July, after a 36 hours long bombardment, Maquire captured the strategic town of Gabel. On November 22, Maquire took part in the Battle of Breslau, On December 5, he also fought in the Battle of Leuthen where he was wounded.

In 1758, Maquire was at the siege and capture of the Fortress of Sonnenstein.

In August 1759, Maquire directed the Siege of Dresden. When he heard of the approach of Prussian relief army, he hastened negotiations. The city capitulated on September 4 just before the arrival of this army. Maquire was promoted Feldzeugmeister (FZM) and appointed commander of Dresden.

In 1760, for the capture of Dresden, Maquire received the Great Cross of the Maria Theresien Order. In July the same year, he successfully directed the defence of Dresden during the siege undertaken by Frederick II of Prussia. Maquire then remained Commander of Dresden till the end of the war.

From May 1762 to May 1763, Maquire was commander-in-chief of the Reichsarmee in Saxony.

In 1763, Maquire became Inhaber of Infantry Regiment No. 35. A function that he retained till his death in 1767. On September 24 1763, Maquire married Maria Antonia von Blümegen.

Maquire died in his estates of Troppau (present-day Opava in the Czech Republic) on January 12 1767.