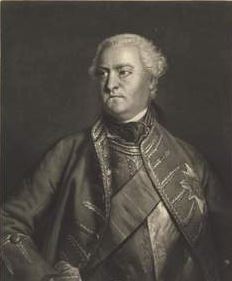 Charles was the second son of Charles Spencer, 3rd Earl of Sunderland and Lady Anne Churchill, the second daughter of John Churchill, 1st Duke of Marlborough.

On September 15 1729, Charles inherited the Sunderland title from his elder brother Robert, becoming 5th Earl of Sunderland, a title which he retained till 1733.

In 1732, Charles married Elizabeth, daughter and heir of Thomas, 2nd Baron Trevor. They had three sons and two daughters.

On October 24 1733, Charles inherited the Marlborough title from his maternal aunt, Henrietta Lady Godolphin, 2nd Duchess of Marlborough, thus becoming 3rd Duke of Marlborough. According to previous arrangements, Charles ceded the Sunderland title and property to his younger brother John.

In January 1734, the new Duke of Marlborough became a member of the ‘Liberty Club’ formed by the opponents of Sir Robert Walpole.

On March 30 1738, Marlborough was appointed colonel of the 38th Foot. On August 11, he became a Lord of the Bedchamber.

On January 26 1739, Marlborough was named Lord Lieutenant of Oxfordshire and Buckinghamshire. On September 1, he received the colonelcy of the 1st Royal Dragoons. On May 6, he was further promoted colonel of the 2nd Troop of Horse Guards.

On March 20 1741, Marlborough was admitted in the Order of the Garter.

In January 1744, Marlborough was elected a Fellow of the Royal Society. In February, when the Jacobite Rebellion broke out in Scotland, Marlborough immediately raised troops to curb the rebellion. The same year, at the death of Sarah, Dowager Duchess of Marlborough, Charles Spencer, 3rd Duke of Marlborough finally inherited Blenheim.

On March 30 1745, Marlborough was promoted to Major-General.

On September 15 1747, Marlborough was promoted to Lieutenant-General.

On June 12 1749, Marlborough became Lord Steward of the Household.

From January 9 to December 21 1755, Marlborough briefly served as Lord Privy Seal. On December 21, he became Master General of the Ordnance.

In 1757, Marlborough, together with Lord George Sackville and General Waldegrave, conducted an inquiry into the failure of the raid on Rochefort.

In 1758, Marlborough led the first amphibious expedition against the French Coasts. On May 23, he arrived at the camp on the Isle of Wight to assume command of his force. On Thursday June 1, the expedition set sail. On Monday June 5, the British fleet arrived in the Bay of Cancale. At 11:00 a.m., Howe with the Duke of Marlborough and Colonel Watson went in the Grace (10) armed cutter to reconnoitre the projected landing place in the Bay of Cancale. At 1:00 p.m., they returned to their ship. By June 6, the landing was completed. On Wednesday June 7 at daybreak, the whole British army except the 3rd brigade marched in 2 columns on Saint-Malo. On June 9, after having burnt the village of Saint-Servan and the suburb of Solidore, Marlborough realized that the fortifications of Saint-Malo were too strong to consider a direct attack against them, decided to retire to the Bay of Cancale. By June 12, Marlborough 's army had completed its re-embarkment. After timid attempts against Granville, Havre de Grâce (present-day Le Havre), Caen and Cherbourg; the amphibious expedition returned to the Isle of Wight where troops disembarked on July 4 and 5. The Duke of Marlborough was then appointed commander-in-chief of the British contingent (12,000 men) sent to the support of Ferdinand of Brunswick in Western Germany. On August 3, this contingent disembarked at Emden. On August 21, Ferdinand's troops finally made a junction with the British contingent at Coesfeld. On September 4, the Allied army (including the British contingent) marched to Dülmen while Ferdinand's vanguard was at Haltern on the Lippe. On October 20, the Duke of Marlborough died of dysentery at Münster and was succeeded by Lord George Sackville in the command of the British troops.

This article borrows most of its texts for the period before 1757 to the following articles:

The section on the period between 1757 and 1758 is mostly derived from our articles depicting the various campaigns, battles and sieges.