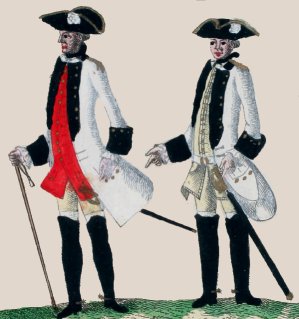 The unit originated from the corps of the Duke of Saxe-Weimar of 1635. This regiment was incorporated into the French Army on January 24 1638 for the Marquis de Coislin. On December 3 1665, it was renamed Mestre-de-camp-général Cavalerie and ranked second in the French Line Cavalry.

During the War of the Polish Succession, the regiment served in Italy. In 1733, it was at Gera d'Adda and Pizzighetone; in 1734 at Tortone, Parma and Guastalla; in 1735 at Reggiolo and Revere.

During the Seven Years' War, the regiment ranked 2nd among the line cavalry and was under the nominal command of the successive mestre-de-camp-général:

However, the regiment was under the effective command of:

When the French Cavalry was reorganised on December 1 1761, the regiment was increased to 4 squadrons, each of them consisting of 4 companies of 40 troopers, for a total of 640 troopers. The 2 additional squadrons came from Seyssel Cavalerie which was incorporated into Mestre de Camp Général Cavalerie.

In 1756, the regiment was stationed at Verdun

In 1757, the regiment joined the Army of the Lower Rhine commanded by the Maréchal d'Estrées for the planned invasion of Hanover. From April 27 to June 17, it was part of the Reserve under the Prince de Soubise. On July 26, the regiment took part in the Battle of Hastenbeck where it was among the cavalry of the left wing. After the Convention of Kloster-Zeven, it followed the main body, led by the Maréchal de Richelieu, who encamped at Halberstadt in Prussian territory from September 28 to November 5. The regiment was placed on the left wing of the first line. At the end of the year, it took its winter-quarters in Kleve on the Lower Rhine, in the fourth line of the French Army.

In March 1758, during the Allied winter offensive in Western Germany led by Ferdinand of Brunswick, the regiment was part of the French garrison of Minden which was attacked by an Allied corps under General Kilmansegg. On March 15, the garrison of Minden surrendered without opposing any serious resistance. However, the regiment was soon exchanged. From March 30 to April 4, it was with Clermont's Army in the camp of Wesel on the Lower Rhine, in the first line of the right wing. In April, when Clermont redeployed his army along the Rhine, the regiment was stationed at Kleve, Donsbrüggen, Nütterden, Zyfflich and Niel; between Kleve and the German-Dutch border. After the successful crossing of the Rhine by Ferdinand's Army on May 31, the regiment retired towards Rheinberg where it joined Clermont's Army on June 2. It remained in this camp until June 12 and was placed on the right wing of the first line. On June 23, the regiment took part in the Battle of Krefeld where it was placed on the left wing of the first line, under FitzJames. In Mid August, after Ferdinand's retreat to the east bank of the Rhine, the regiment, as part of the Army of the Lower Rhine now under Contades, recrossed the Rhine to follow the Allied army. On August 20, it was encamped near Wesel where it was placed on the left wing of the first line.

In 1760, the regiment served on the Atlantic coasts. 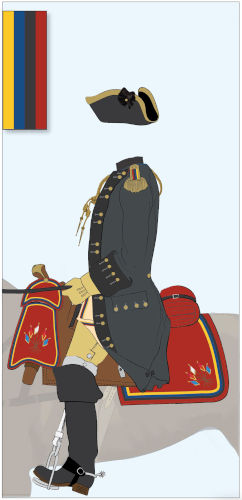 Until April 1759, trumpeters and kettle drummers probably wore a green uniform heavily laced with a braid consisting of 4 stripes (red, black, blue and light orange) and with yellow buttons. The kettle drummers wore a white turban with red and yellow plumes.

Until April 1759, trumpeters and kettle drummers probably wore the livery of the House of Castries. Unfortunately for the moment, we have no information on this livery.

N.B.: the regiment did not carry any white standard. 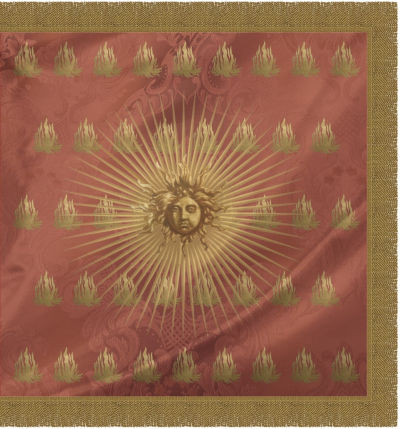