Since 1282, when Peter III of Aragona was crowned King of Sicily, the Spanish interests in the Italian peninsula made necessary the presence of an armed forces. Most of these forces were nominally “Spanish troops”of mixed composition. Other times “Italian” units were created, when nobility and people sided for the Kings of Aragon.

In 1443, Alphonse V entered in Naples, which passed under the crown of Aragon as a Church fief. From this moment, Spaniards and Italian fought many time together against France; the fightings culminated in the so called “Italian wars”.

There were many Italian troops serving under the Spanish commander Gonzalo Fernandez de Cordoba , the so-called “El Gran Capitan”, one of the fathers of the tercio, at the siege of Atella. Neapolitan cavalry and the Calabrian infantry performed well. From that time thousands of Italians went to war under the banners of Castille and Aragon (already united under a Catholic King) for Spanish interest. At the battle of Ravenna (1512), for example, one half of the Spanish army was composed by Italian soldiers.

The Milan Cavalry Regiment was for its origin totally Lombard. It bore the name “Milan” for about a century and displayed proudly on his standards, the snake swallowing a man, also today on the crest of the City of Milan.

The regiment had its origin in 1661 when several horse companies from Piedmont and Lombardy were united to form the “Trozo de Caballeria de Milan”.

Immediately after its creation in 1661, the unit was sent to the port of Finale where it embarked for Cádiz. It then sailed on the Guadalquivir to Sevilla. It then marched from this city to the Province of Extremadura where it joined the army of Don Juan of Austria and covered the siege of Alconchel. In 1662, it took part in the action of Estremoz and in the siege of Borba; in 1663, in the siege of Evora and in the Battle of Ameixial; in 1665, in the Battle of Montes Claros; in 1667, in the relief of Albuquerque.

In 1674, the unit was sent to Catalonia to fight against the French. In 1675, it campaigned in Roussillon. In 1677, it took part in the action on the Espolla and in 1678, in the unsuccessful attempt to relieve Puigcerdá.

In 1684, the unit successfully defended Gerona.

The unit mustered 500 man, officers included, in four mounted companies, each 35 man strong. Later the force was reduced to three squadrons , each in four companies for a total of 384 men. Each company consisted of:

In 1704, during the War of the Spanish Succession (1701-13), the regiment took part in the campaign in Portugal, in the capture of Salvatierra and Monsanto, in the action of the Sarcedas, and in the blockade and capture of Portalegre; in 1705, in an engagement near Monsanto, in 1706, in the campaign in New Castile; in 707, in the Battle of Almansaand in the capture of Lérida. On November 30, the regiment integrated the former Regiment of the Marquis of Valdefuentes, another cavalry regiment made of troopers recruited in Lombardy. In 1708, the regiment was at the siege of Tortosa. In 1709, it campaigned the County of Rivagorza to contain the Catalan insurgents and participated in the attack of the bridge of Montañana. In 1710, it fought in the Battle of Almenar and in the disastrous Battle of Saragossa. In 1711, it campaigned around Balaguer and Calaf; and in 1712, in Catalonia. In 1713, the regiment took part in the blockade of Barcelona; and in 1714, in the siege and capture of Barcelona.

In 1715, the regiment took up cantonments in the Province of Valencia.

In 1718, the regiment embarked at Barcelona for the reconquest of Sicily. It occupied Palermo and took part in the blockade of Syracuse. In 1719, it fought in the Battle of Francavilla. In 1720, it evacuated Sicily and returned to Spain. Soon afterwards, it was sent to releive Ceuta on the coast of North Africa. In 1721, it returned to Spain and took up quarters in Navarra.

In 1733, during the War of the Polish Succession (1733-35), the regiment embarked for Genoa and then marched to Tuscany. In 1734, it fought in the Battle of Bitonto. In 1735, it embarked at Naples for Sicily. It soon returned to Tuscany and entered in Florence. It then followed the main army in Lombardy and took part in the blockade of Mirandola. At the end of the war, it returned to Spain.

In 1744, during the War of the Austrian Succession (1741-48), one squadron of the regiment was sent to Italy to reinforce the Spanish cavalry. In 1747, this squadron returned to Spain.

In 1763, the end of an age, the regiment had few Italians in its ranks and his name was changed in “Regimiento del Rey” , however its ancient coat of arms bearing the Arms of Milan was mantained.

Note: The snake is still worn on the collar of the parade dress of the “Lanceros del Rey” Regiment part of the Guards of the present King of Spain, H.M. Don Juan Carlos I.

In May 1762, the regiment took part in the campaign in Portugal under the Marquis de Sarria. It was at the sieges and capture of several places. After driving the Portuguese out of their defensive lines on the Talladas, it took up cantons in Mata until the siganture of peace.

In 1763, the regiment marched to Almagro in the Mancha where it took up cantonments. 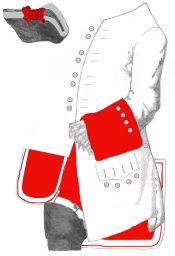 Standards: crimson field fringed in silver; central device consisting of a snake swallowing a man (still present nowadays in the crest of the city of Milan).

Dr. Marco Pagan (Rome) for the first complete version of this article.