The regiment originated from the Italian unit of don Marino Carrafa who, on September 14 1678, embarked on a galley squadron sailing from Melazzo for Catalonia.

In 1703, 6 other companies from the Tercio de Napolitanos Viejos de Cataluña were incorporated into the unit.

In 1704, a regiment was raised in Naples for the duke of Castel de Ayrola.

In 1729, a conflict arose among the three Italian regiments in the Spanish service about their respective seniority. On September 20 1729, the colonel of the regiment, don Lofredo Gaetano, deposited a memorandum to the War Council to prove the seniority of his regiment, pretending that it dated as far back as September 14 1678. The Council asked for further proofs. Gaetano then presented a certificate issued by lieutenant-general don Domingo Recco on March 16 1723 where the role of the regiment during the blockade of Barcelona in 1705-1706 was confirmed.

In 1731, the regiment was increased to two battalions, its second battalion consisting of the former regiment of Palermo initially raised in 1718 in Sicily for colonel don Juan Bautista Gravina.

During the War of the Austrian Succession, in 1745, the regiment joined the army of the Infant Don Filippo. It then counted 2 battalions for a total of 1,400 men. On November 23, 1746, the regiment formed part of the garrison of Tortona who surrendered under the condition that it could leave the town freely, provided that it would not serve for an entire year and would return to Spain. On June 6 1748, the regiment left Spain but, on reaching the port of Villafranca, the 2nd battalion was sent back to Spain.

During its existence, the regiment was under the command of:

In 1792, the regiment was disbanded and its troops incorporated into Nápoles Infantry. 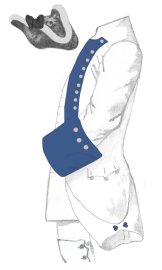 The coronela (colonel flag) of the regiment was white with a red Burgundian cross terminated in each corner by a medallion carrying the arms of Milan (a green snake wearing a gold crown and eating a man) surmounted by a golden crown. In the middle: the arms of Charles III surrounded by the necklace of the order of the Toison de Oro (Golden Fleece).

The batallonas (ordonnance flags) of the regiment were white with a red Burgundian cross terminated in each corner by a medallion carrying the arms of Milan (a green snake wearing a gold crown and eating a man) surmounted by a golden crown.

Juan José Torres and the Asociación Cultural de Modelismo Histórico Alabarda, G. Boeri and Luc Antonelli for the information and counseling provided for this article.