The regiment was raised by Hercules Count Montecuccoli according to a decree issued on May 13 1701. It was formed from 5 coys coming from the disbanded Caprara Cuirassiers and from 5 newly enlisted coys.

In 1702, during the War of the Spanish Succession, the regiment was attached to Schlick's Corps who operated in Upper Austria and Bavaria. In 1703, the regiment was transferred to Hungary where it relieved the Castle of Munkács. In 1704, it was stationed in Moravia and did not take part in any major action. In 1705, it joined the main Imperial army. In 1706, as part of Pálffy's Corps, the regiment campaigned once more in Hungary, taking part in a skirmish near Kreuz and in the occupation of Gran (present-day Esztregom/HU). In 1707, in Starhemberg's Corps, it fought at Pullendorf and was than transferred to Rabutin's Corps. In 1708, it campaigned in Transylvania. In 1709, it took part in the relief of Grosswardein (present-day Oradea/RO) and in the Battle of Királyhágó. From 1712 to 1716, the regiment garrisoned Grosswardein (present-day Oradea/RO).

In 1716, during the Austro–Turkish War (1716–18), the regiment campaigned in Hungary, taking part in the siege of Temesvár. In 1717, it was posted near Karansebes and saw no action.

From 1739 to 1741, the regiment garrisoned in the Komitat of Neograd in Hungary.

In 1741, at the outbreak of the War of the Austrian Succession, the regiment was initially posted in Silesia. In was afterwards sent to Bohemia but saw no action. In 1742, it took part in the Battle of Chotusitz and in the siege and recapture of Prague. In 1743, it was sent to Bavaria where it took part in a skirmish at Simbach before being transferred to the Rhine. In 1744, it initially served on the Rhine but had to return to Bohemia where it took part in a skirmish at Beraun (present-day Beroun/CZ). In 1745, it fought in the battles of Hohenhriedberg and Soor.

At the time of the Seven Years' War, the regiment was often designated as “Alt Modena” to differentiate it from the “Jung Modena” Dragoons Regiment.

The regiment was disbanded in 1768 and its squadron allocated to various cuirassier and dragoon regiments. The carabiniers were transferred to the newly established Carabinier Regiment No. 1 “Albert Duke Sachsen-Teschen”.

In June 1756, at the beginning of the war, the regiment was stationed in Neustadt an der Waag (present-day Nové Mesto nad Váhom aka Vág-Újhely) in Slovakia and counted 822 men and 777 horses. It was soon ordered to join Piccolomini's Corps in Bohemia.

On June 18 1757, during the Prussian invasion of Bohemia, the regiment took part in the Battle of Kolin where it was deployed in the second line of the cavalry left wing under Count von Stampach. In October, it took than part in Hadik's raid on Berlin.

In 1758, the regiment campaigned in Saxony. It fought at Zittau and was later allocated to the “Reichsarmee”.

By mid-August 1759, during the Austro-Imperial campaign in Saxony, the regiment (or the Jung-Modena Dragoons) was attached to Hadik's Corps. On September 21, it took part in the Combat of Korbitz where it was deployed in the centre of Hadik's Corps under Major-General Fürst Lobkowitz: its charge prevented Gyulay Infantry from being annihilated by the Prussian infantry. The regiment and particularly Rittmeister (captains) Dessewffy and Kaltschmidt distinguished themselves in this combat. On November 20, 4 squadrons of the regiment took part in the Battle of Maxen where they were deployed in the second cavalry column of Sincère's Corps under the command of Lieutenant-General Count Stampa.

In 1761, the regiment served in Silesia.

In 1762, the regiment was initially stationed in Silesia. In November, it was transferred to Saxony under Maquire at Dippoldiswalde. On November 26, it was at Altenberg under FML Berlichingen. 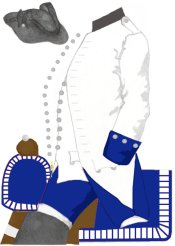 The Albertina Handschrift shows only 13 buttons on the coat. However, Raspe shows 16 buttons and is followed by most other uniformologists.

The Bautzener Bilderhandschrift shows a lace on the tricorne, a red neckstock and straw breeches.

Donath shows two rows of buttons on the coat.

According to Donath (Kaiserliche Kürassiere 1740-1765), trumpeters wore a black tricorne laced gold with a yellow round cockade with a red centre and a black plume tipped yellow. They wore a dark blue coat laced gold with white shoulder straps, white swallow nests laced gold, yellow buttons, white cuffs laced gold and white turnbacks laced gold. Their waiscoat was dark blue and their breeches dark blue. Saddle cloth and sabretache were similar to those of the troopers.

Harald Skala for the sections on origin and history, and on service during the war.