In 1715, the disbanded Ordenes Nuevo Cavalry was incorporated into the regiment. In 1716, the regiment was transferred to New Castile and then to Aragon. In 1717, it returned to Valencia.

According to the regulation of February 10 1718, the regiment was renamed “Salamanca.” In May, it received orders to march to Barcelona in Catalonia where it embarked for the reconquest of Sicily, taking part in the occupation of Palermo and in the Battle of Francavilla. In 1720, when the Spaniards evacuated Sicily, the regiment returned to Spain. It was immediately redirected to the coast of North Africa to relieve the place of Ceuta.

In 1762, the regiment joined the army assembling for the planned |invasion of Portugal. It was allocated to the corps of the Count de Maceda posted at Ciudad Rodrigo. At the beginning of May, this corps entered into Portugal. It then took part in the Siege of Almeida which surrendered on August 25. On September 9, the regiment accompanied the headquarters at Cerveyra. On October 24, it marched from Castelho Branco for Ciudad Rodrigo. Meanwhile, from May 17 to 22, the carabinier company took part in the occupation of the Province of Tras os Montes and of the places of Bragança, Oteyro and Chaves. At the end of the war, the regiment returned to Castile. 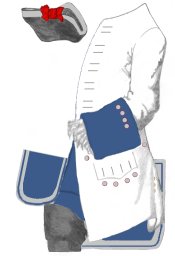 Standards were made of crimson damask, embroidered and bordered in silver; the centre design consisted of a trphy of two flags and three fleurs de lys; streamers were red, light blue and purple.