The tercio was created during the Nine Years War, on January 20 1694. On March 31 of the same year, it assembled in Murcia under the command of Don Antonio de Funes Carvajal. It counted 15 companies and comprised: 2 chiefs, 2 adjutants, 1 chaplain-major, 14 captains, 15 sub-lieutenants, 15 sergeants, 30 corporals, 90 musketeers and 865 arquebusiers and pikemen. It was known as the Tercio Provincial de nuevo Murcia. On May 27, the new tercio took part in an engagement against the French near Barcelona. From June 15, part of the tercio participated in the defence of Gerona which capitulated on June 28. These troops were allowed to leave the town with the honours of war but had to promise not to serve against the French for the rest of the war. In 1695, another part of the tercio took part in the defence of Palamos. In 1697, the reunited tercio took part in the defence of Barcelona which surrendered on August 10.

In 1699, the tercio was ordered to embark at Cartagena for the relief of Ceuta. In 1700 and 1701, it defended the place with great valour against the Moors.

At the beginning of the War of the Spanish Succession, in 1702, the tercio returned to Gibraltar and then marched to Jeréz de la Frontera. In 1704, the tercio took part in the defence of Gibraltar which surrendered in August. The tercio then joined the King's Army in Estremadura. It took part in the invasion of Portugal and in the siege and capture of Porto-Alegre on June 8. On November 17, the tercio was instructed to raise a second battalion. In 1705, the tercio garrisoned Badajoz. In 1706, it retired from Badajoz, marched to Madrid and encamped at Atienza where an army was assembling. As part of Geofreville's Corps, it entered the province of Valencia and stormed Orihuela on October 18 and Elche on October 21. In 1707, the tercio was transformed into a regiment known as the Regimiento de Murcia. On April 25, it took part in the battle of Almansa. In 1708, it defended the town of Tortosa against a coup-de-main. In 1709, it garrisoned Tortosa. In 1710, on July 27, it took part in the engagement of Alguaira; on August 15 in the engagement of Penalva; on August 20, in the defeat of Zaragoza; and on December 10, in the victorious battle of Villaviciosa. In January 1711, it took part in the capture of the Castle of Miravete. The first battalion then reinforced the garrison of Tortosa where it repulsed an attack of the Allies. In 1713, it joined the army blockading Barcelona.

On June 12 1715, the disbanded Regimiento de Coria was incorporated into the regiment.

On July 21 1717, the regiment embarked at Barcelona for the reconquest of Sardinia. On August 20, it landed near Pulla. On August 22, it encamped in the Monastery of Lluc to prepare the siege of Cagliari which surrendered on September 30.

At the end of August 1720, the regiment sailed to Málaga where a force was assembling for the relief of Ceuta, besieged by the Moors. On December 9, the regiment took part to a sally. On December 21, it repulsed an attack. The Moors finally retired on the night of February 4 to 5 1721.

On February 25 1733, the regiment was sent to the relief of Oran. In 1734, it returned to Algeciras. In 1735, it went to Málaga where it was subdivided in several detachments to serve abroad. Its grenadiers were detached to the Corps of observation of the Estremadura and cantoned in Talavera. In 1737, the grenadiers joined the regiment at Málaga.

In 1742, the regiment was sent to Ceuta where it suffered heavy losses from the plague in 1743 and 1744. Losses were so severe that a third battalion was raised in Spain in 1744. This third battalion was disbanded in 1747. In 1748, the regiment was transferred from Málaga to Marbella from where it despatched various detachments to Spanish settlements.

In 1757, the detachments garrisoning places in Africa returned to Spain and the entire regiment marched to Navarre where it assumed garrison duty in Pamplona.

In 1760, the first battalion was sent to La Coruña and the second to Cadiz. On December 4, the second battalion embarked for the island of Santo Domingo.

In 1761, the first battalion joined the army assembling in Estremadura while a new second battalion was raised to guard the border.

In 1762, the regiment marched from La Coruña and marched to Castilla where it formed a brigade with Africa Infantry. On May 5, it was part of the Spanish force who advanced into Portugal from the camp of Zamora. On May 9, it captured Miranda; on May 17, Braganza; on May 22, Chaves; on August 25, Almeida; on September 9, Salvatierra and La Guarda. The Spanish force then retired to Estremadura . On November 1, the regiment was back to Albuquerque. From November 9, it took part in the sieges of Yelves and Campomayor. Meanwhile, the second battalion took part in the defence of Havana against a large British expeditionary force. The city surrendered on August 13. 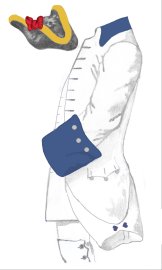 The État militaire (circa 1737-1750) in the Anne S.K. Brown Collection illustrates a fusilier of this regiment with blue breeches. 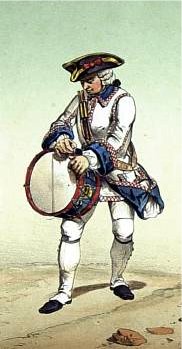 N.B.: the conde de Clonard illustrates the drummer with blue turnbacks while, in 1759, Taccoli represented a fusilier of the same regiment with white turnbacks.

The coronela (colonel flag) of the regiment was white with a red Burgundian cross terminated in each corner by a medallion carrying the arms of the regiment (alternating squares illustrating a white tower on a red field and a red lion rampant on a white field) surmounted by a golden crown. In the middle: the arms of Charles III surrounded by the necklace of the order of the Toison de Oro (Golden Fleece).

The batallonas (ordonnance flags) of the regiment were white with a red Burgundian cross terminated in each corner by a medallion carrying the arms of the regiment (alternating squares illustrating a white tower on a red field and a red lion rampant on a white field) surmounted by a golden crown.