The unit was raised on September 1 1572 as the Tercio viejo de la armada des mar océano de infanteria napolitana (old tercio of Neapolitan infantry of the navy). On September 8, it embarked aboard the fleet to protect Malta against an imminent Turkish attack. To do so, it operated at Corfu and in Morea (Peloponnese peninsula) against Navarino before retreating to Messina in front of superior Turkish forces. In 1574, the tercio took part to the conquest of Bizerte, in the actual Tunisia, and operated against the Kerkennah Islands.

In 1625, the tercio sailed for South America where it took part to the expedition against the Dutch who had previously captured the establishment of San Salvador in Brasil. On April 2, the tercio disembarked in front of San Salvador, repulsed a Dutch attack against the convent of San Benito, opened the trenches and captured the town on May 1. It then returned to Spain and arrived at Málaga on October 24. In 1626, the tercio was transferred from Málaga to Cádiz.

In 1638, the tercio defended the town of San Salvador in Brasil against the enterprises of a Dutch expedition who laid siege to the place on March 16. On May 18, the Dutch launched an assault on the San Antonio gate and the Spanish defenders would have yielded to greater numbers without the intervention of the tercio. The Dutch were driven back and lifted the siege on May 26.

On June 14 1646, the tercio was aboard the Spanish fleet who fought the naval battle of Orbetello against the French. In June 1647, it relieved Lerida besieged by a French force. It was then transferred to Minorca to submit the town of Mahon who had rebelled. On October 5, the tercio disembarked near the town and encircled it with siege works. On April 6 1648, the Mahon was finally stormed. In 1651, during the siege of Barcelona, the tercio patroled the coast and secured the lines of communications of the Spanish army. In 1660, it took part to operations at the mouth of the Tagus river.

In 1675, the tercio took part to the defence of Barcelona against a French army. It then sailed to Cádiz.

In 1685, the tercio first sailed to Portolongone on the island of Elba. It then sailed to Naples and finally sailed back to Cádiz. In 1688, it reinforced the garrison of Melilla.In 1689, it relieved the city of Larache threatened by Arab forces. However, the latter laid siege to Larache which finally had to surrender. The Spanish troops became prisoners of war. In 1691, the prisoners were brought to Algiers and freed. The tercio was then brought back to Spain. In 1692, the Navy wanted to disband the tercio but the protests of don Juan Bautista Visconti who commanded the unit finally reverted the decision.

In 1694, the tercio was back to Africa where it defended Ceuta against a large Moroccan army who besieged it. In 1697, the tercio was transferred from Ceuta to Barcelona which was threatened by the French army of marshal de Vendôme. On August 10, the Spanish force defending Barcelona capitulated and the tercio sailed for Málaga. In 1699, the tercio received a few hundreds Italian recruits to replenish its ranks.

In 1705, during the reign of Philip V the first Bourbon king of Spain, the unit ceased to be associated to the Navy and became an integral part of the army.

During the War of the Spanish Succession, the regiment served in Spain whete it joined the army of the Extremadura on January 5. On December 15, the regiment took part to the capture of Alcantara. A decree of February 28 1707 abridged the name of the unit to Nápoles. In 1709, it took part to the Spring campaign who led to the victory of Gudina (May 7). In 1710, it served in Extremadura. In August 1713, it was ordered to march from Villanueva de la Serena, where it was cantoned, to Aragon. It then joined the army of Catalonia and garrisoned Tortosa. In 1715, the regiment was transferred to Barcelona where its second battalion was disbanded.

On June 19 1718, the regiment embarked at Barcelona and sailed for Sardinia and then for Palermo where it arrived on June 28. It then sailed for Loretto where it arrived on August 1. It took part to the siege of Messina who surrendered on September 30. In 1719, it was at the camp of Francavilla. In 1720, it served in Sicilia, defending the lines of Palermo before sailing back to Spain.

In 1721, the regiment incorporated the Italian regiment of Valdenotte and Toscana.

On February 22 1727, the regiment joined the Spanish army besieging Gibraltar and worked at the trenches. In March 1728, after the signature of a treaty with Great Britain, the regiment was transferred to Cádiz to assume garrison duty.

At the beginning of the War of the Polish Succession, in 1731, the regiment embarked aboard the Anglo-Spanish fleet under the command of admiral Wages. It disembarked at Livorno where it joined the army. The army then moved to Apulia. A detachment of the regiment stormed the castles of Lunegiana, Naza and Venza. In 1734, the regiment took part to the siege of Orbetello which surrendered on May 16. The regiment also fought at the battle of Bitonto (May 25). In 1735, it took part to the blockade of Mirandola which surrendered on August 31.

In 1736, the regiment returned to Spain and took its quarters in Barcelona. Its first battalion then counted 648 men and its second 644. In 1737, the regiment was transferred to Andalusia, in 1738 to Valencia.

During the Seven Years' War, the regiment ranked 1st among the Italian infantry and was under the command of:

It did not take part to the campaign of 1762 against Portugal. 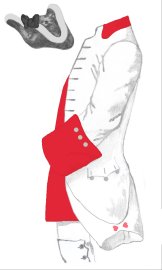 The coronela (colonel flag) of the regiment was white with a red Burgundian cross terminated in each corner by a medallion carrying the arms of the regiment (5 red cross on a silver field) surmounted by a golden crown. In the middle: the arms of Charles III surrounded by the necklace of the order of the Toison de Oro (Golden Fleece).

The batallonas (ordonnance flags) of the regiment were white with a red Burgundian cross terminated in each corner by a medallion carrying the arms of the regiment (5 red cross on a silver field) surmounted by a golden crown.