The tercio was created on July 21 1705 in the Kingdom of Navarra for the “Maestre de campo” Don Francisco Ignacio de Mencos. Some authors trace its origin as far back as 1632, associating it with the Constable of Navarra's Tercio.

At the end of the Summer of 1705, during the War of the Spanish Succession, the new tercio was barely organised, uniformed and armed when it marched towards Aragon. It arrived at Saragossa at the end of September. By October, the tercio was occupying Fraga and defending the Cinca. On November 1, it was attacked by a large number of Catalan insurgents and forced to capitulate. It then retired to Barbastro. In 1706, the tercio took part in the siege of San Mateo, Villareal, Ontiniente and Alcira. It later seized Mallen; relieved the garrison of Sádaba, defeated the enemy at Magallon, Tarazona, Cascante and Tudela, and took part in the storming of Egea de los Caballeros. On 28 February 1707, the tercio was renamed “Regimiento de Navarra”. The same year, it relieved the place of Jaca, was at the capture of the Castle of Ainsa, and took part in the siege and capture of Lérida. During the siege, Colonel Mencos was killed in a duel. In 1708, the regiment participated in a diversion during the siege of Tortosa and stubbornly defended the bridge of Montañana. On July 20 1709, the Court of Navarra authorized the creation of a second battalion. Meanwhile the first battalion took part in the defence of Arenys. At the beginning of the campaign of 1710, the regiment took part in the reconquest of Estadilla. It later participated in an engagement at Balaguer and defended Ainsa In 1711, it formed part of the garrison of Tortosa and drove back a surprise attack. In 1712, it campaigned against the insurgents in the mountains of Catalonia. In 1713, it formed part of the garrison of Tarragona, supplying detachments to garrison neighbouring towns.

On April 20 1715, the disbanded “Regimiento de Pamplona” was incorporated in the regiment as its second battalion. Effective incorporation took place on June 9. In July, the regiment took part in the reconquest of the Balearic Islands. It then returned to Valencia where it received orders to be transferred to Ceuta on the coast of North Africa.

In 1718, the regiment returned to Barcelona and was allocated to the army for the reconquest of Sicily. It took part in the capture of Messina. The first battalion then garrisoned the place while the second participated in the blockade of Melazzo. In 1719, the second battalion took part in the Battle of Francavilla and then reinforced the garrison of Messina. When the place surrendered, the regiment was allowed to retire to Palermo. After the treaty of The Hague in 1720, the regiment was transported to Barcelona.

In 1721, the regiment went to Galicia. In 1723, it was transferred to the District of Navarra where it formed part of the garrison of Pamplona.

In 1733, at the outbreak of the War of the Polish Succession, the regiment marched to Málaga from where it was transported to the port of Alicante. It joined the expeditionary force destined to Italy. In 1734, the disbanded “Regimiento de Valladolid” was incorporated in the regiment who was garrisoning Porto Longone and Portoferraio. It later took part in the Battle of Bitonto. In 1735, it campaigned with the Army of Lombardy, occupying San Benedetto and besieging Mirandola. In 1736, the regiment returned to Spain where it was cantoned in Aragon.

In 1739, a detachment (200 men) of the regiment embarked for Portovelo and Cartagena de Indians (present-day CartagenaCartagena in Colombia).

On 24 August 1750, the regiment was instructed to join the garrison of Ceuta on the Coast of North Africa, distinguishing itself in the defence of the place in 1753.

In 1756, the regiment returned to Spain where it formed part of the garrison of Cádiz.

In 1762, the first battalion of the regiment set off from Cádiz for Castile. On September 16, it was ordered to join the Army of Extremadura for the planned invasion of Portugal. It then took part in the sieges of Campo Maior and Elvas. Meanwhile, on October 10, the second battalion sailed from the Ferrol for Cartagena de Indias. Two companies of this battalion were then sent to Porto Rico. On December 18, the first battalion was ordered to rejoin the garrison of Badajoz. 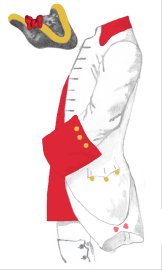 The coronela (colonel flag) of the regiment was white with a red Burgundian cross terminated in each corner by a medallion carrying the arms of the regiment (gold links on a red field) surmounted by a golden crown. In the middle: the arms of Charles III surrounded by the necklace of the order of the Toison de Oro (Golden Fleece).

The batallonas (ordonnance flags) of the regiment were white with a red Burgundian cross terminated in each corner by a medallion carrying the arms of the regiment (gold links on a red field) surmounted by a golden crown.