A Protestant unit was created in 1558 from the old Bandes de Guyenne which were recruited in the region of the Garonne River. It was initially named after his colonel: M. du Tilladet. In November 1562, at the death of the King of Navarre, Antoine de Bourbon, the regiment was assigned to guard his son, Henri de Navarre. Somewhere between 1568 and 1570, it became known as the Garde du Roi de Navarre (King of Navarre's Guards).

This regiment took rank in the French army only in 1589 when Henri de Navarre was crowned King of France as Henri IV. However, it was desiganted by the name of its colonel. It's only on March 22, 1594 that the regiment took the name of "Navarre". In 1591, it was at the sieges of Chartres and Rouen. In 1594, it accompanied Henry IV when he entered into Paris and then marched to the relief of La Capelle and took part in the siege of Laon. In 1595, the regiment served in Burgundy, taking part in the siege of the Castle of Beaumont and of Dijon and in the combat of Fontaine-Française. Recalled in Picardie, in November it was at the blockade of La Fère. In 1596, it was at the siege of La Fère. In 1597, it took part in the unsuccessful attack on Arras. In 1598, it followed the king at Nantes and took its winter-quarters in Flander. In 1600, the regiment served in Savoy and took part in the capture of Bourg-en-Bresse.

In 1610, during the War of the Jülich Succession (1609-1614), a detachment of the regiment took part in the expedition against Jülich. In 1611, the regiment left Bourg-en-Bresse after dismantling its fortifications.

In 1659, after the Peace of the Pyrenees, the regiment returned to France. In 1663, 20 companies of the regiment took part in an expedition to Africa.

Navarre Infanterie was among the six French regiments known as Vieux Corps. The fact that Navarre Infanterie, Champagne Infanterie and Piémont Infanterie were all created during the same year gave rise to endless argumentations about their respective ranking. In 1666, Louis XIV had to edict a regulation stating that each regiment would alternate for the 2nd, 3rd and 4th ranks on a yearly basis.

In 1667, during the War of Devolution (1667–68), the regiment took aprt in the sieges of Berghes, Furnes, Courtrai and Oudenarde.

In 1698, the regiment was at the camp of Compiègne and went to Metz. In 1699, it was sent to Neuf-Brisach to work at the fortifications.

In 1701, on the eve of the War of the Spanish Succession 1701–13), the regiment was part of the corps assembled at Neuf-Brisach. In 1702, it campaigned on the Rhine. In 1703, it took part in the sieges and capture of Kehl, Alt-Breisach and Landau, and in the Battle of Speyerbach. In 1704, the regiment fought in the disastrous Battle of Blenheim where it was almost entirely captured. In 1705, two weak battalions participated in Villars' incursions in Germany where he captured the castles of Seltz, Rodern and Hatten. After an exchange of prisoners, the regiment was re-established at its normal strength of 3 battalions and assigned to the garrison of Strasbourg. In November, the three grenadier companies of the regiment were detached and sent to reinforce Berwick who was besieging Nice. These three companies spent winter in this region. At the beginning of 1706, the regiment was entirely assembled at Strasbourg and attached to Villars' Army. It took part in the relief of Fort-Louis, in the storming of the entrenchments of Drusenheim and in the capture of the Marquisat Island. In 1707, the regiment forced the Lines of Stollhofen and then took part in the attack on the entrenchments at Lorch and in an action near Gemunden. It was then transferred to Provence but received counter-orders on the way and returned to Strasbourg. In 1708, it campaigned in Flanders and was present at the Battle of Oudenarde but was not involved in any combat. It then took part in a raid against Cadzand Island. In 1709, it participated in the capture of Warneton on the Lys and in the sanguinary Battle of Malplaquet. The regiment continued to serve in Flanders until June 12, 1711 when it was transferred to the Army of the Rhine. In 1712, the regiment was recalled to Flanders and later took part in the Battle of Denain and in the sieges of Douai and Le Quesnoy. In 1713, it was transferred once more to the Army of the Rhine and took part in the siege and capture of Landau and then covered the siege of Fribourg.

In 1756, the regiment was stationed on the coasts of Bretagne.

In 1757, the regiment joined the Army of the Lower Rhine commanded by the Maréchal d'Estrées for the planned invasion of Hanover. At the end of June, it was at the camp of Bielefeld with d'Estrées's Main Corps. On July 26, the regiment took part in the Battle of Hastenbeck where it was attached to the column under Chevert which accomplished the flanking movement to attack the Hanoverian left wing in the woods. After the victory, the regiment encamped at Grosselsen near Hameln with the main body of the Army of the Lower Rhine from July 31 to August 2. After the Convention of Kloster-Zeven, it followed the main body, led by the Maréchal de Richelieu, which encamped at Halberstadt, in Prussian territory, from September 28 to November 5. In this camp, the regiment was placed in the centre of the second line. At the end of the year, it took its winter-quarters in the second line of the French army at Einbeck and Alfeld.

In February 1758, when Ferdinand of Brunswick launched his winter offensive in Western Germany, the regiment retired on the Rhine with the rest of the French forces. From March 30 to April 4, it was in the second line of Clermont's Army in the camp of Wesel on the Lower Rhine. In April, when Clermont redeployed his army along the Rhine, the regiment was stationed in Moers. During the night of May 29 to 30, two battalions of the regiment, posted near Homberg, were surprised and driven back by Wangenheim at the head of a small detachment which had crossed the Rhine. The Allies took possession of the new uniforms destined to the regiment. After the successful crossing of the Rhine by Ferdinand's Army on May 31, the regiment retired towards Rheinberg where it joined Clermont's Army on June 2. It remained in this camp, where it was placed in the centre of the second line, until June 12. On June 23, the regiment took part in the Battle of Krefeld where it was placed on the right wing of the second line under Harvé. It was then kept in reserve behind the centre. The reserve was sent to support Saint-Germain's Division but arrived too late and had to cover the retreat. In Mid August, after Ferdinand's retreat to the right bank of the Rhine, the regiment, as part of the Army of the Lower Rhine now under Contades, recrossed the Rhine to follow the Allied army. On August 20, it was encamped near Wesel where it was placed on the infantry right wing of the second line. On September 29, under Saint-Pern, six grenadier companies of the regiment took part in the surprise attack on Bork, the camp of the Prince of Holstein.

On April 11, 1759, the regiment was part of a corps of 14 bns and 4 sqns detached from the army of the Marquis d'Armentières under the command of the Comte de Saint-Germain to reinforce the Duc de Broglie who was threatened by the advance of an Allied army. Saint-Germain marched towards the Lahn River and arrived at Königstein on the evening of April 13, too late to take part in the victorious Battle of Bergen. On April 14, he made a junction with Broglie's Army. In June, during the French offensive in Western Germany, the regiment was part of the main army under the command of the Marquis de Contades and was deployed in the second line, on the right wing of the infantry centre. On August 1, the regiment took part in the Battle of Minden where it was deployed in the Duc d'Havré's Corps in an advanced post at Eichhorst to the left, opposing Hille.

On February 14, 1761, the regiment formed part of the garrison of Kassel. On July 29, the regiment was part of Broglie’s right division, which marched from Paderborn to Driburg (present-day Bad Driburg), where it encamped.

In mid-March 1762, the regiment formed part of the Army of the Upper Rhine under the Prince de Soubise. On June 24, it took part in the Battle of Wilhelmsthal where it was deployed in the second line of the infantry centre. By mid-July, it was posted in Kassel. On November 20, Louis XV issued his instructions regarding the French armies serving in Germany, specifying which units should return to France right away and which should stay in Germany till the final evacuation. The regiment was among those which returned to France. 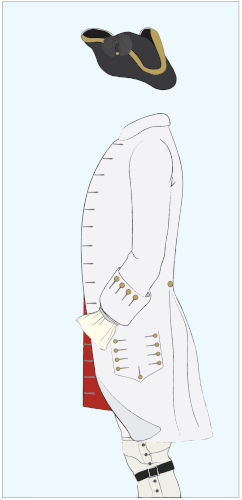 Colonel Colour (as per the État militaire of 1758-1759-1760 and La Chesnaye in 1759): white field with a white cross sown with golden fleurs de lys and carrying the Arms of Navarre in its centre and at the end of each branch.

Ordonnance Colours (as per the État militaire of 1730-33): silken feuille morte (dead leaf) field with a white cross sown with golden fleurs de lys and carrying the Arms of Navarre in its centre and at the end of each branch.