The regiment dates from Lybecker's Scanian Riders established in Kristianstad and Hälsingland in 1658. From 1659, the unit was under the command of Georg Henrik Lybeck. In 1660, four companies were sent to Jämtland in order to be incorporated in the cavalry squadron of Bohuslän-Jämtland. Indelta in 1680 and was officially named "Norra Skånska Horse Regiment" only in 1682. It counted 8 companies for a total of 1,000 men.

In the Great Northern War shipped to Pomerania 1700, then departed with Gyllenstierna to Poland 1702 and belonged to the King's Army thereafter. Captured after Poltava. Reraised but could only be used as garrison troop due to the lack of horses and equipment. Norwegian campaign 1718.

In 1757, the entire regiment was part of the expeditionary force sent to Pomerania under Field-marshal Mathias Alexander von Ungern Sternberg. It served in the successive Pomeranian campaigns until 1761.

On November 18 1758, a detachment of the regiment was part of General von Lingen's force at the combat of Güstow. 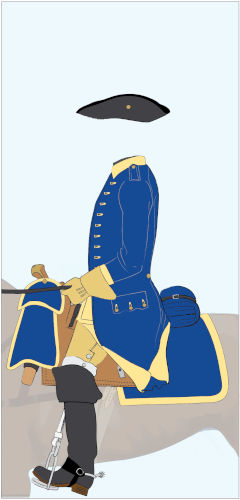 The musicians wore medium blue uniforms with straw swallow nests laced (probably) white at the shoulders. The uniform had no additional laces.